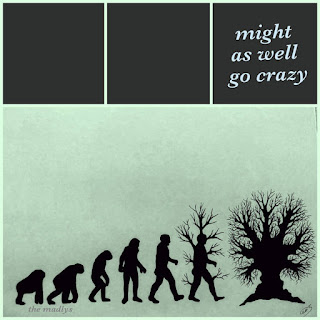 In a special one-off SotD2, Susan Omand listens to the title track of The Madlys new album, might as well go crazy...

The Madlys have a new album out, did you know? Or rather, that should be The Madlys HAS a new album out since there is just one genius behind all of this musicking, including all the singing, song-writing, playing of instruments, mixing and engineering, and that is our own occasional contributor and renowned writery type steve harris. Is there no end to what this man can do?

Seemingly not. The Madlys list musical influences on the band Facebook page as ranging “from 60s rock/pop to new wave & post punk to 80s indie, electro, Britpop, garage, lunatic fringe americans and some gentler people with words and tunes.” So that covers a fair bit then and I must admit, having listened to just about everything that has so far been released, it’s not far off the mark!

Six busy months of 2015 were taken up writing and recording the songs for this latest album, might as well go crazy, which was released on May 3rd so I had a listen to the title track.

That twang in the guitar at the very start makes the hairs on the back of my neck stand up (in a very good way) and a broad smile spreads across my face as the bass kicks in for this very catchy upbeat song. Then the unique voice that is mr harris starts to sing. I hope he won’t mind me saying this but, having spoken to him, his singing voice always comes as a surprise to me as it has an edge to it, almost a Gene Pitney quality (not a bad thing) that really makes it memorable.

Lyrically the song is very clever, using a cheerful and very hooky melody and tight harmonies to mask what could easily become a very dark song if played to a different tune. Listen to the words and you’ll see what I mean. And, if I didn’t know this was a completely new song, I’d think the tune was 30 plus years old, it feels so familiar, bringing to mind bands like Mental As Anything from back in the day and stirring very many happy memories that I guess I never actually experienced since this song wasn’t around then....

Anyway, I’ve probably now unintentionally insulted mr harris enough with this review, so I’ll just encourage you to listen to the title song and buy the rest of the album.

Buy the Album from Bandcamp below.