SotD - Seasick Steve, I Don't Know Why She Love Me But She Do 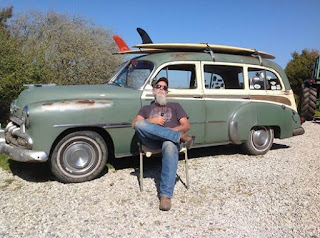 AlbieMedia's Song of the Day (SotD) is our choice of a single or album track that we think you need to hear. Today, Nate McKenzie tells how he discovered the music of Seasick Steve...

I was introduced to one of my favourite musicians while having a beer in a dim bar in a no-name town in Northwest Ohio.

The bar owner, a thin man in his mid-sixty's, was behind the counter chatting up the regulars while two attractive bartenders slung brews to the patrons. Two flatscreen televisions were mounted on the wall behind, and the wall at the end of, the bar top. On them played old music videos. I mean old. Grainy, bad quality, poor sounding. But the owner just loved to have them on while he was there.

He, the owner (whose name, for whatever reason, I could never remember then and can't remember now), professed himself to be a big fan of blues music. That caught my ear and I joined the conversation. Back and forth we rattled off names of dead musicians, each testing the other to confirm that we did, indeed, have the requisite knowledge base that deserved unspoken respect. Tommy Johnson? Yes. Son House? Of course. John Lee? Muddy Waters? T-Bone? Mississippi John Hurt? You know it.

"I know of a fella' bet you're not familiar with." the owner challenged me. He didn't say it in a snide way, but rather, like a guy who was excited to encounter another blues man and share a secret he doesn't often get to divulge.

As it turns out, it wasn't exactly "new" music but it was my first introduction to a relatively unknown great called Seasick Steve.

Seasick Steve Wold has been around for a while. He toured in the 60s and was close friends with Joni Mitchell. The Brits are well fond of him. He won a 2007 MOJO Award for Best Breakthrough Act. (Yes, he toured in the Sixty's but was a "breakthrough" in 2007 - the music industry exists in its own dimension) Jack White considers him a major influence. He produced the 2006 debut album from Modest Mouse titled "This Is a Long Drive for Someone with Nothing to Think About". However, Wold's own major label debut wasn't released until 2008. He called it "I Started Out with Nothin' and I Still Got Most of It Left".

Wold makes his own guitars. He makes them out of random found objects like hubcaps. He uses stomp boxes and diddley bows. Then he turns the sounds from those instruments into some of the best damn blues music you've never heard.

He plays the blues because he's lived the blues.

That honesty, that self-awareness, is what makes the blues so profound and Seasick Steve a living legend.

I consider it an unforgivable travesty that most of America, even die-hard blues devotess, have never heard of him.

It has been a few years since I have been to that bar. I don't even know if it's still open or owned by the same guy. I do know, however, what the secret was that he was so giddy to share.