SotD - Saturday Throwback: The Who 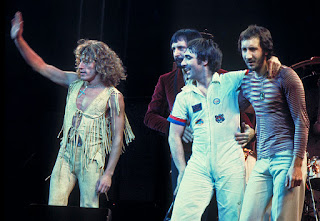 Song of the Day (SotD) is our choice of a single or album track that we think you need to hear. However, instead of the new music featured through the week, Saturday Throwback is a track from back in the day to kick off your weekend in style. This week Susan Omand dons her fishtail parka for a song by The Who...

I think somebody somewhere wants me to mention The Who as this week's Saturday Throwback as I've seen and heard their songs in several different places online, on the radio and in person this week, not least in a wee poem that my mother wrote and read down the phone to me for National Limerick Day (and you think I'm the weird one in the family?).  So I guess I'd better heed the gods of fate (and mother) and do something about it.

But which song to choose? They have a truly extensive back catalogue stretching back to the group's formation in 1964, when their first single "I Can't Explain" hit the top ten in the UK after being picked up by pirate radio stations, through My Generation and Happy Jack and coming right up to date with a new track as recently as 2014 called Be Lucky. In between there are 53 other singles, 11 studio albums and 12 live albums to choose from. Not content with regularly dominating the music charts they also stormed the cinemas in the 1970's with the seminal film Quadrophenia and the rock opera Tommy so, of course there are those soundtracks to choose from too.

Even TV wasn't safe from their influence as several of their songs have been used as TV show themes, most notably with the CSI franchise where every iteration of the show, Vegas, Miami, New York and even the short lived CSI Cyber used a track from The Who for their theme song.

The band themselves also went through a few different iterations with Roger Daltrey and Pete Townsend as the bedrock of the band, sadly losing the other original members Keith Moon in 1978 and John Entwhistle in 2002. The current line-up, because yes, fifty years on, they are still a touring band, is Daltrey and Townsend with Pete Townshend's younger brother Simon on  guitar,  Frank Simes, Loren Gold and John Corey on keyboards, Welsh bassist Pino Palladino and a certain Zak Starkey picking up the drumsticks for them since 1996.

Anyway, I digress. I managed to narrow it down to four songs in contention for my The Who choice of Song of the Day: Saturday Throwback.

Behind Blue Eyes - one of the best known because of all the covers, yet the least Who-like in style,
My Generation - the one that Alice Cooper once called the first Metal song ever recorded.
Boris the Spider - which would have won but I couldn't find a decent recording of it on youtube so...

Today's song of the day was written by Pete Townshend in 1965 after being inspired by a Smokey Robinson track. It's cynical, controversial and lyrically incredibly clever. It's been covered by the greats of punk such as the Sex Pistols and the Ramones.