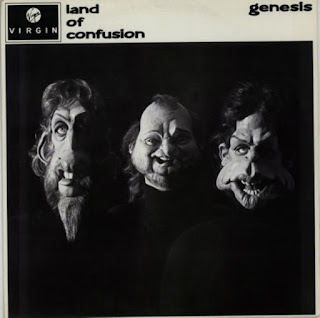 It's not a strange scenario to find Steve Taylor-Bryant in a land of confusion, it's where he lives. Today though it's apt as he talks Genesis...

"Ooh Superman where are you now
When everything's gone wrong somehow
The men of steel, the men of power
Are losing control by the hour."

I am a fan of Phil Collins. There, I've said it out loud. I can't go back on it. I am though and for some reason have spent my life having to justify the fact. I don't understand it. He's a technically gifted drummer, a fantastic pianist, a great lyricist and funny! If you've ever been to a Phil gig or seen videos of him talking backstage or in a studio the guy cracks you up. As for his singing, a point many wrong people have said is weak, I like it. There's something familiar and comforting hearing Mr. C sing into my earholes, it's as if he's talking directly to me rather than singing to millions of fans.

That being said I was raised by a Genesis fan. My father loves them and I kind of do. I can't listen to Gabriel's Genesis, arty nonsense if I'm honest but, from And Then There Was Three, the band changed. Phil's vocals suit particular styles and the band reinvented themselves for a new generation with a more mainstream sound without losing the sound of very talented musicians having a blast. I fell hard for the new Genesis in the 1980's at the same time as, even as I was very youthful, I developed a love of political irony. Genesis and satire puppet show Spitting Image were my staples for a few years and it's no surprise at all that, in 1986, the two would collide in one of the best pop videos of the decade. The lyrics to Land of Confusion are filled with the state of the world, the social and political problems of the time (that fits our current political scene quite well) and what people would need to do to make life better. It's a great song, it has an important message, it's musically brilliant and the mid-eight works better than in most songs, BUT it doesn't impact psychologically as well as maybe it should audibly. However, when you start a video with Ronald Reagan dreaming and add in Margaret Thatcher, Gorbachev et al in a Reagan nightmare war zone, the song starts to really hit home. We maybe don't live under the threat of nuclear annihilation that we did then but we face terrorism, political and economic corruption, and daily threats still. It was a powerful song with a serious message played out on screen with an easily accessible video that got across the point but in a comedic way which is often the best way.

You can hear Land of Confusion on the best of Genesis album Turn It On Again and I suggest you purchase the entirety of the tunes as they are all brilliant and your wellbeing will thank me. I'm right of course. Jesus he knows me and he knows I'm right.