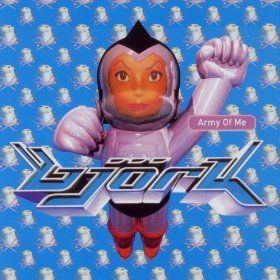 Song of the Day (SotD) is our choice of a single or album track that we think you need to hear. However, instead of the new music featured through the week, Saturday Throwback is a track from back in the day to kick off your weekend in style. This week Steve Taylor-Bryant heads for Iceland's finest with Army of Me...

There was a time in the 1990's I was quite lonely. I had a vision of a relationship with a woman who wasn't conventional. Maybe she dressed differently to the norm, perhaps had a more relaxed view on life than others might have, perhaps some tattoos which, twenty odd years ago, was still a new and exciting thing to see on the female form and not the essential fashion choice it seems to be in this age we live in. These differences I was searching for definitely stem from my pop culture choices at the time. I was in love with 'drunk era' Drew Barrymore, besotted with Lori Petty, and my musical choices included PJ Harvey, The Cranberries and Portishead, all containing some really talented female singers offering something other than bubble gum pop. At the head of that list though, the lady who owned my heart for a long time, was Icelandic talent Bjork.

I'd been a fan of The Sugarcubes (stop singing Push the Button that was The Sugababes) who were a rock-ish band in the late '80s and after they disbanded and I survived puberty to become a man my affection for the voice of Bjork just became stronger. I know she's not everyone's cup of tea but I admire the hell out of her. Constantly innovative and willing to experiment Bjork took to solo stardom like a duck to water. There was still a rocky anarchic edge to the star but the music took on a whole new form that played with electronic sounds more than any star I can think of at the time. Two albums stand out for me and they are 1993's Debut which contains gems like Human Behaviour and Big Time Sensuality and the other is my favourite release of that period, 1995's Post. Post mixed some beautiful lyrics that showcased Bjork's entire and unique vocal range, songs like Oh So Quiet and the wonderful Hyper-Ballad still give me chills when I listen. But there is one song that still hits every spot for me. It has pumping bass and drums, layer upon layer of fascinating sound programming and feels, even today, like a perfect film score not just a song from Sucker Punch.

Ladies and gents today's Song of the Day - Army of Me.