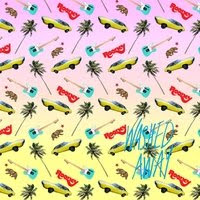 AlbieMedia's Song of the Day (SotD) is our choice of a single or album track that we think you need to hear. Today, Nate McKenzie gets Washed Away with My Heart Beats 4 U...

The 2003 self-titled debut by LA based band Rooney will forever stand as a personal favourite. Top to bottom it is one of the most fulfilling albums of its era. That iconic 50's-influenced sound that is done better in SoCal than anywhere else permeates the entire record and makes it a perfect summertime listen. Any of the eleven tracks could have been the lead single but when Blueside was featured on The O.C. it became the band's unofficial flagship track and drove their swell of popularity. It also didn't hurt that lead singer Robert Schwartzman starred in Princess Diaries (and is brother to Jason Schwartzman and related to all the many Coppolas; or Coppoli?).

Rooney is a band that stands out as seminal on the soundtrack of my college-age years.

Washed Away, released on 6th May, is the new album from the band, their fourth overall and their first since Eureka in 2010. There are twelve tracks on Washed Away with My Heart Beats 4 U being the first single. These sentences are purposely perfunctory because I do not look forward to writing the next paragraph...

My Heart Beats 4 U is evisceratingly bad. It is a curry-filled dumpster in the apex of a Texas summer; just pure, hot, vomit-bating garbage. If you manage to get past the textspeak use of '4' in place of 'for' in the song title you'll still be hard-pressed to ignore that My Heart Beats 4 U starts out sounding like a ripoff of Beverly Hills by Weezer (an already average song). Beyond that, there's nothing else that remotely resembles a redeeming quality present in the song. It is a cookie-cutter pop song - something I never thought Rooney would be capable of relegating themselves to, even to make a quick buck.

I listened to the song twice just to make sure that I hate it as much as I do and I can say, definitively, it is one of the least likeable songs that I've heard in the last few years. Especially coming from a band that I have only fondness for. If you're going to sell out, I guess you might as well go full Fall Out Boy. (I'm making that a thing; it's like 'Jumping the Shark' without becoming a parody of yourself; just a shittier version of yourself)

To wit, in their own words, from Popstars (off the first album):

Luckily, Washed Away is quickly recovered from its fate as a drink coaster in my home. The very next track, Don't Be A Hero pulsates with sexy, groovy sublimation and redeems the entire album. Washed Away is wholly eclectic and has many bright spots, with Hero being the brightest of those (despite its significant instrumental similarities with Billie Joel's It's Still Rock and Roll). My Heart Beats 4 U is like a surgically enhanced, Chanel wearing blonde who accidentally wanders into an underground Rock & Roll club for people who don't listen to shitty music. It just doesn't fit in.

If you're feeling masochistic, give My Heart a listen (here)

Otherwise, be sure to check out Don't Be A Hero; then finish up with anything (or everything) from their self-titled album to cleanse the palate.