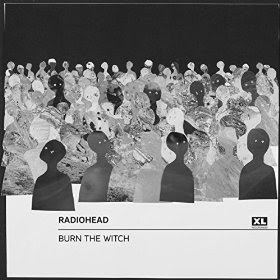 AlbieMedia's Song of the Day (SotD) is our choice of a single or album track that we think you need to hear. Today, Nate McKenzie listens to Radiohead, Burn the Witch....

The last few days of the internet have been rife with Radiohead rumours. The band's people have been digitally erasing their presence from the internet leading to speculation about their next step. At least one of those rumours has thus far been proven to be true.

Last week, flyers were delivered anonymously to the homes of Radiohead fans throughout the UK. The flyers simply read, "Sing the song of sixpence that goes 'Burn the witch' we know where you live".

Strange and intriguing to say the least.

Thankfully, the anticipation was quickly rewarded on Tuesday when Radiohead released their new single, Burn The Witch.

The accompanying video features colonial-era claymation figures and is most definitely not meant for children. You'll find no spoilers here but suffice it to say that it is a better story than anything Michael Bay has produced.

Burn The Witch, appropriately, sounds like a spell being cast on the listener. Staccato strings play the part of that feeling that climbs your spine as you look into the swirl of deep bass and electronic sounds mixing in a cauldron. Thom Yorke's voice is enticingly haunting in the way you might imagine a witch would seduce an unsuspecting victim. On its own, the song is one hell of a return to form for the band; it has an elegant disturbia with that aloofness which makes them impossible to predict. Partnered with a video that captures the essence of the insanity that was the witch burning trend of the 17th Century and it is easy to see why Radiohead are the revered artists that they have come to be.

This is not a song for your lazy summer day playlist. I wouldn't even suggest you listen to it on a warm summer night drive in the country - unless the sadist in you enjoys the rush of a sense of impending dread.

Rather, grab a bottle of deep red wine, enjoy a viewing of The Craft, a go with a Ouija board with Burn The Witch on repeat. This song is an instant Autumn soundtrack staple.

Find AlbieMedia's Song of the Day playlist on YouTube and Spotify