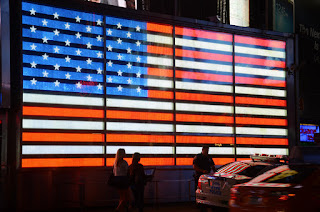 AlbieMedia's Song of the Day (SotD) is our choice of a single or album track that we think you need to hear. Nate McKenzie heads for the long weekend in style....

The final weekend in May is Memorial Day weekend here in the States. It is the unofficial-official kick off to the summer. That means cookouts, camping, lounging by the pool, and parties. There is never an occasion that can't be supplemented by a quality soundtrack, so for the Song of the Day I have multiple songs to get you through each day, from beginning to end.

Even if you are not in the States, take advantage of my benevolence and enjoy some good tunes that will only serve to illuminate your weekend. As George Washington once famously said, "Yo, kid! This track is my JAM!"

Now, I do not necessarily condone everything the song promotes (or do I?) but you can't argue with the message: Fuck it all, let's party.

Walk the Moon has gotten all of the attention but Bleachers deserves to be recognized. Rollercoaster is pure energy. It is the first song you should be listening to when all of your friends get in the car and you're headed to the barbecue.

Gasoline could be this summer's Dark Horse (Katy Perry) but it's too good. Methodical in its progression to the chorus, backed by a ricochet of wood block and reverberating soundboard accents, Gasoline is formulaic dance-pop, but Halsey's lyrics add a sincerity that isn't found in most other radio friendly pop drivel.

Lighting matches just to swallow up the flame like me?
Do you call yourself a fucking hurricane like me?


Awreeoh - Can't Bring Me Down

From the Dope soundtrack, Awreeoh (pronounced like Oreo) has one of the best party songs you can find anywhere. No surprise: the four tracks from the fictional band were written and produced by the (supposedly) non-fictional Pharrell and Can't Bring Me Down is the best of the four. It's like island music meets hip-hop club music. The hook is simple, but you'll feel it:

I'm in a good mood / Can't bring me down

You know that part of the night when the energy is beginning to wane and you need to infuse the party with a song that no one knows but everyone can get into? This is that song. It's a rock and roll dance track on steroids.

AFTER THE AFTER PARTY

End of the night music is imperative. You don't want to ruin a great day of drinking with friends and strangers by killing the mood with poor music choices; you want to bolster those connections.

These two songs blend from Rogue into the Sea and should be listened to back-to-back always. Around a bonfire, arm in arm with a weekend fling that you know won't last, Lydia will serenade the moment and say what you're thinking while your lips are busy.

And so I woke up near the sea,
Sand in my dreams

We call this the End of the Night Song.

On the drive home, queue up Soco Amaretto Lime, roll down the windows, and sing along at the top of your lungs like good little Emo kids are supposed to. You won't be judged - everyone else is doing the same thing. And that's the whole point.