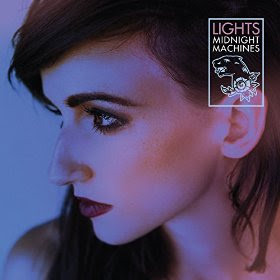 AlbieMedia's Song of the Day (SotD) is our choice of a single or album track that we think you need to hear. Today, Nate McKenzie switches on Lights...

After a bit of a heavy theme yesterday, I felt I owe it to everyone to start Friday off with something brighter.

Pop music is not normally my brand of music but even I found it impossible to deny the allure of pop musician Lights when I attended one of her shows with a friend a few years back.

Although only 5'5" the Canadian-born singer/songwriter looms large onstage with energy that spreads throughout the crowd. Amidst a stiflingly hot September midday in downtown Columbus last year, Lights was one of the few acts that was able to rile up the attendees during her set; she has an infectious sound and an I'm-friendly-but-don't-fuck-with-me demeanour that you can't help being drawn to.

Only three albums into her career, Lights has a hardcore following. I was first introduced to her music in the form of the buoyantly pining of Toes, off of her second album, Siberia, and that's all it took for me. Her ability to put on a great show is only half of the reason.

Yes, her voice is saccharine, her passion apparent, but, what impresses me is how her voice sounds when she switches off the electric and goes acoustic. After Siberia's success, Lights launched an acoustic version of the album (though with fewer tracks); her most recent full album, Little Machines was also - let us call it - re-imagined as an acoustic album, plus two new tracks, and titled Midnight Machines.

It is actually an ingenious idea: take the upbeat tracks your fans love and slow them down, making your music suitable to a myriad of moods, while losing nothing from the original intent. That effort also showcases her legitimate abilities as a musician. Lights is not just a pretty face with a pretty voice; she writers her own lyrics, music, and plays multiple instruments. It may come in a tiny package but her talent is complete.

The video for Up We Go doesn't necessarily bear that but it is the perfect song for a Friday morning in which you're undoubtedly shucking work to peruse the internet, fighting the urge to quit your job and go get drunk.

The buzzing synth from the get should wake you up before your second mid-morning coffee and help you get through the day as, rest assured, Lights feels your pain:

It's a dead end, and money's tight
And it's been a long time of this
Something has got to give
Everyone here is ready to go

On second thought... make a break for it.