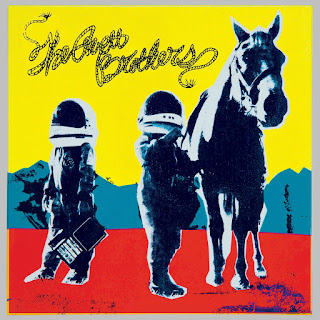 AlbieMedia's Song of the Day (SotD) is our choice of a single or album track that we think you need to hear. Today, Nate McKenzie listens to Ain't No Man by the Avett Brothers...

When I first heard The Avett Brothers I had the impression that they were the poor man's Mumford and Sons. Even their band names are similarly familial. That was before I learned that the Brothers Avett had been around for five years longer than Papa Mumford.

Over the past few years Scott and Seth Avett's outfit has surpassed that of Marcus Mumford in quality and popularity (though Mumford's new song, There Will Be Time is a terrific product). You could say I am #TeamAvettBros.

Of course, that doesn't mean they are without fault.

Case in point: Ain't No Man, the new single from their upcoming album True Sadness (June 24th). It's not that the song is bad, it's just that there isn't much to it. It's perfect for a lazy day by a pool or a drunk sing-along with friends but not much else.

I have come to enjoy Avett Brother's folk persona, their feet-on-the-ground pragmatism that comes across in their lyrics and music. Aint' No Man is a bland gospelization of an uplifting Avett Brothers song. They do positive-affirmation wonderfully and effortlessly. Unfortunately Ain't No Man is more 'sans effort' than wonderful. It is an earworm song in the way that all other pop radio songs are earworms and I don't mean that as a compliment.

I am excited to hear the rest of the album but Ain't No Man ain't my jam.

As always, though, listen and decide for yourself.