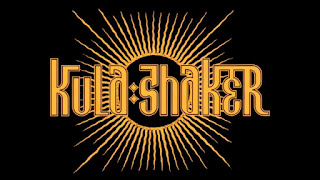 There was no hint of paraskevidekatriaphobia (fear of Friday 13th) as Barnaby Eaton-Jones headed to the Gloucester Guildhall for the Kula Shaker 2016 Tour...

When I was young and bouncy and big of hair, I remember buying Kula Shaker's K album – their glorious debut – and playing it on a loop for the entire day. I couldn't get over how every song was, for me, an instant classic, and how it was just the sort of music that made me want to swing my microphone round on stage and pull silly stunts with my guitar. I was in a band called Stoned Immaculate, who very nearly got signed, and we were a cross between The Doors and The Wonder Stuff. I now wanted permanently flicky blonde hair like Crispian Mills (Kula Shaker's frontman) and hit a groove that was something else entirely. This was an assault on my ears and my mind, that made my spine tingle and my toes tap. 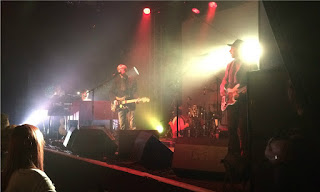 I followed the band through to their second album, Peasants, Pigs & Astronauts and was sad to hear they'd split up in 1999. But, they resurfaced again with their third album in 2007, Strangefolk, and then followed that with Pilgrim's Progress and, this year, K 2.0 (as it's exactly twenty years since K was released). But, the one thing that eluded me – as a long-time fan – was ever seeing them live; mainly because I had a long-term illness that restricted my lifestyle. As any fan of any band knows, the mark of a great act is how well they play live. Reviews and YouTube footage stand testament to the fact that Kula Shaker give 110% in their tours and really are a masterclass in muscianship. 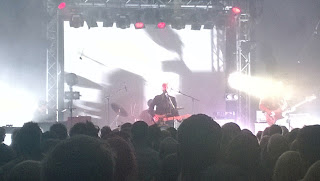 So, as a 42-year old fat bloke with a fractured foot and a condition that means exercise has a knock-on effect to my health, it was with some trepidation that I bought the 'Standing Only' tickets for Gloucester Guildhall's visit from Kula Shaker themselves. There were a few of us attending, all wishing to see the Infinite Sunsters strut their mystical music to the masses. The audience were a real mix of older and younger generations, with follically-proud hippies to follically-preened hipsters being at either end of the spectrum. The sprung floor at the Guildhall meant that 300 people bouncing at the same time became a sort of trampoline effect and, I imagine, if you had consumed a few liquid libations, then it also acted as a levelling effect where you didn't feel the woozy effects of alcohol until you left the auditorium and tried to negotiate the stairs to the toilet. 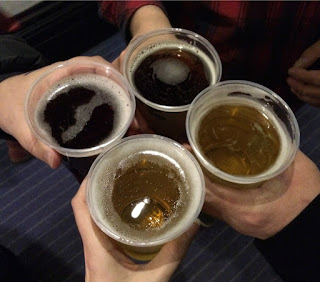 Kula Shaker's opening act was a one-man and his guitar type of affair, who seriously reminded me of how I was way back in the day (when I could play guitar and affect an air of coolness that comes with youth). His name was Willow Robinson and, for someone who loves his music, I was a bit ashamed I'd never heard of him as he was fantastic. To stand on a stage on your own, with just your songs for company, and to capture the crowd of partisans was some task and he did it with his opening number. He seemed a top chap and had a style that was effortless and energetic at the same time. If you want to check him out, his Facebook page has 31,000+ people imploring you to do so: https://www.facebook.com/willowrobinsonmusic/

As an interesting sidenote, as Crispian Mills is the son of famed actress Hayley Mills (and famed director Roy Boulting), Willow Robinson comes from creative stock too; his father is legendary actor/writer Bruce Robinson – no stranger to looking like a Rock God himself!

So, a few drinks down, a support act to be impressed by, and the babysitter's text that the kids had finally gone to sleep, we stood expectantly at the back of the auditorium (where I'd managed to purloin a stool from the sound technicians). The screen buzzed with psychedelic imagery and the lights started changing colour. A roar went up when the band sauntered on, waving politely, and launched into Sound Of Drums as their opener. They couldn't have picked a better song to start with and the rousing chorus and familiarity got the vocal chords warmed up and the drunken dancing began.

It has to be said that Kula Shaker know how to judge an audience and equally know how to build a setlist that will have exactly the right moments of ebb and flow; bookending new songs with older classics. They kicked off at 9:15pm and ended the set with a brilliant version of Tattva that segued into their (in my opinion) much better version of Deep Purple's Hush. With the last chorus of Na Na-Na-Na's echoing around the building, they exited quicker than they'd entered and the room filled with the roaring of grateful voices and the clapping of hands that had been punching the air previously. The impending stationary stampede, with running on the spot compulsory to call back the band, was immensely loud and brought forth the re-entry of drummer Paul Winterhart (who's pounding and melodic beats reminded me of a perfect cross between Zeppelin's John Bonham and Cream's Ginger Baker), keyboardist Jay Darlington (who's swirling melodies and Hammond-esque stabs were weaving their magic throughout), bassist Alonza Bevan (who's backing vocals and steady groove provided a perfect platform to launch off) and, finally, lead singer and guitarist Crispian Mills (still looking as elfin-like as he did 20 years ago and giving it the full experience as he held the audience in the palm of his hand). 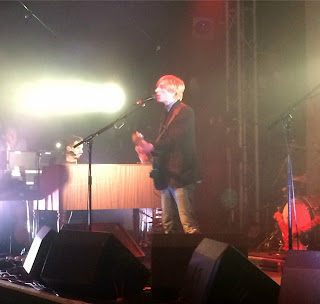 A five song encore was the perfect length to whip the crowd up into more of a frenzy and leave them singing the completely Sanskrit lyrics of Govinda, like it was our first language. 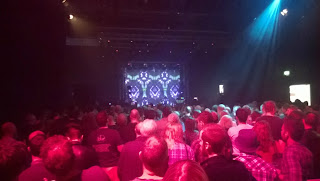 I was home by 11:30pm, which is a perfect time for a middle-aged gentleman who likes to rock but also needs his sleep. Being as I'm only 10 months younger than Kula Shaker's frontman, I'm exhausted just thinking about the passion and drive and love he put into his performance tonight. Sleep well, Kula Shaker, but arise again for your next hard-rocking gig. If I had been wearing a hat, I would've taken it off to you. But, in the language that informs the background to the band, I say 'shubhamastu!' instead; which means 'Cheers! Good health!' in Sanskrit. 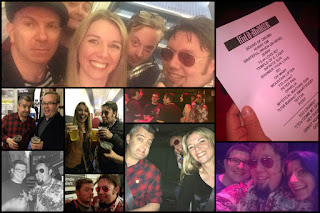 You can catch Kula Shaker, still on their 2016 tour, by going to their website to see where tickets are available: http://www.kulashaker.co.uk/

Images - many thanks to Barnaby Eaton-Jones