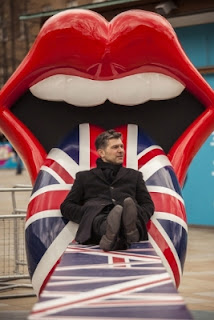 Alex Emanuel, a lifelong Rolling Stones fan, was left feeling like a rock star when he met his heroes while touring Exhibitionism...

New Yorker Alex was genuinely shocked when he turned round after a tap on the arm to be met by Mick Jagger, Keith Richards, Charlie Watts and Ronnie Wood, whilst enjoying the Recording Gallery within the critically acclaimed, blockbuster exhibition, Exhibitionism - the first exhibition on The Rolling Stones held at London's Saatchi Gallery until 4th September.

As Alex exchanged handshakes and back slaps with his heroes, he said afterwards: "It's going to sound silly but for a moment I thought I was a member of the Rolling Stones. It's not every day you get to meet your idols."

Alex also visited iconic Rolling Stones locations during his trip to London including Edith Grove, Chelsea where the band lived together, Regents Sounds in Denmark Street where they cut their first couple of albums, the 100 Club where they played an impromptu gig in 1982 and Olympic Studios where 'Sympathy for the Devil' was recorded.

Alex added: "Liverpool has The Beatles, Memphis has Elvis - The Rolling Stones are London. The Stones have been with me all my life so to visit Exhibitionism in London was fantastic. The show has given me a unique glimpse of the city through the eyes of The Rolling Stones."

Thea Jeanes-Cochrane, Director of iEC (International Entertainment Consulting), the company behind Exhibitionism, said: "We're thrilled to have made Alex's dreams come true at Exhibitionism. The exhibition offers the most in-depth insight into The Rolling Stones and their incredible career. We've worked hard to create something utterly breath-taking and it's very pleasing to see the fans reactions. Alex has obviously enjoyed every moment. Meeting the band was the ultimate icing on the cake!"


Alex was taken on the once-in-a-lifetime trip to London, after the city's official tourism body, Visitlondon.com identified him as a genuine 'super fan' of the Rolling Stones.

In 2014 London's live gigs attracted 6.6 million people around half of which were tourists. These 3.3 million visitors generated £663 million for the local economy, and helped sustain 4,847 jobs in London.

Chris Gottlieb, Chief Marketing and Communications Officer at VisitLondon.com added: "Alex's Rolling Stones tour of London shows how the city is steeped in the history of one of the world's greatest rock bands."

Tourism initiative Fans of London - devised by Visitlondon.com, which is supported by the GREAT Britain Campaign, British Airways and Hilton celebrates the blockbuster events across London this year including The Queen's 90th birthday, 400 years of Shakespeare, and the world's first international exhibition on The Rolling Stones, Exhibitionism.

Exhibitionism runs until 4 September at London's Saatchi Gallery. Tickets are available at stonesexhibitionism.com.