News - Proms in the Park 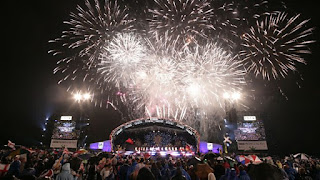 It's twenty years since the first BBC Proms in the Park and  the line-up for this year's events is announced...

Britain’s largest outdoor classical music event, Proms in the Park is part of the annual spectacular culmination of two months of music-making at the BBC Proms festival, when the world-famous Last Night celebrations spill out from London's Royal Albert Hall and thousands of people come together at venues across the UK to be part of the magic of the Last Night.

Presented for the first time by BBC Radio 2 presenters Michael Ball in the evening and Anneka Rice in the afternoon, Proms in the Park will be broadcast live on Radio 2 throughout the day, culminating in a live big-screen link-up to the Royal Albert Hall for the traditional Last Night sing-along.

Announced this morning on the BBC Radio 2 Ken Bruce show, Ball, who has performed at the Proms, will also sing on stage at the event in a special performance with tenor Alfie Boe.

He will also lead a tribute to the late Sir Terry Wogan – the veteran broadcaster and great friend of Proms in the Park who presented the show for the last 18 years.

Michael Ball says: “What an honour it is for me to follow in the giant footsteps of my wonderful friend Sir Terry Wogan. He always said it was his favourite night of the year. The Proms is a glorious celebration of music, and to be part of the Last Night festivities, especially on Proms in the Park’s 20th birthday, is very exciting.”

Sir James Galway says: “It was exciting to be part of the very first Proms in the Park back in 1996. I played variations on a theme from Carmen and, 20 years on, I’ll be performing the Carmen Fantasy again. It has been lovely to see how the event has grown and developed over the years, and to be part of the festivities once again, especially in this special birthday year, is fantastic!”

Joining Sir James in the night’s celebrations is girl band All Saints. One of the biggest bands of the 1990s, All Saints have reformed in 2016 and will take to the Hyde Park stage in a live set that promises to get everyone dancing and into the Last Night of the Proms party spirit.

In the centenary year of author Roald Dahl, cast members from Matilda: The Musical will perform highlights from the Royal Shakespeare Company’s hit West End production, and there will be a special appearance from the musical’s composer and lyricist, Tim Minchin.

Also announced as part of the line-up is 1980s icon Rick Astley, who was just 21 years old when he scored major success with Never Gonna Give You Up. In his 50th birthday year, Astley will be reflecting three decades of music-making with his greatest hits alongside new songs and covers.

Further artists will be announced.

Beyond London, there will be Last Night celebrations across the UK, at Titanic Slipways (Belfast), Glasgow Green (Glasgow) and for the first time the event goes to north Wales at Parc Eirias (Colwyn Bay), inviting music-lovers from across the nations to enjoy the magic of the Last Night of the Proms.

Announced earlier this week, music lovers will have a chance to be part of the Last Night of the Proms celebrations by joining the BBC Get Playing virtual orchestra. This performance of amateurs playing Bizet’s Toreador Song will be shown on the Big Screens at Proms in the Park events around the UK. Comedian and amateur pianist David Baddiel, the ambassador for BBC Get Playing, will be at Hyde Park to introduce the film. The virtual orchestra is part of the Get Playing campaign which aims to inspire amateur music lovers everywhere throughout the summer.