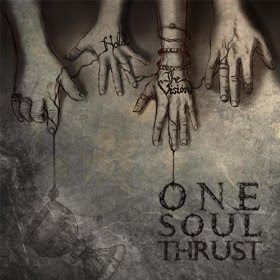 At the end of January, we brought you news of Canadian rock band One Soul Thrust's new single, now we have news of their latest album release, with a heartfelt twist to the story...

Sometimes called one of Canada’s best kept secrets, yesterday, Edmonton, Alberta’s One Soul Thrust released their latest offering, “Hold The Vision,” in a show of heartfelt compassion by donating 100% of the proceeds for the first 30 days (when most sales occur) to help rebuild Ft. McMurray, a city centred in an area of Alberta that has been ravaged by a still-burning wildfire approximately the size of New York City.

One Soul Thrust’s drummer, Todd Pretty, grew up in Ft. McMurray and has seen his family evacuated and his childhood neighbourhood burned. Approximately 100,000 people have been displaced and as the release date for “Hold The Vision,” coincided with the tragedy, the band felt they wanted to offer proceeds as a way to help the destroyed community and the displaced residents.

The album was already finished when the fire broke out yet interestingly it reflects the band’s relation to it. The opening track is a song called “Pthumper” written about Pretty, and track #3 “Naked Arms of Love”, uses the image of running through fire into loving arms. Much of the rest of the album suggests coming through adversity to find new strength through love. Intuitive to the core like many artists, One Soul Thrust now feels that they were being internally directed in the last year to donate through this album.

“Hold The Vision,” is the first half of a project called “Hold The Vision, Trust The Process” and we'll have a review of the album for you soon. The second half is recorded and awaits release in October, 2016.


You can find the album on iTunes, CD Baby and Amazon