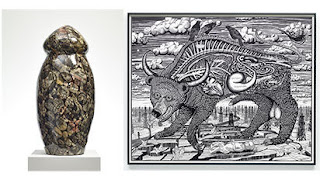 Grayson Perry is a huge favourite here at AlbieMedia (read Susan Omand's article on one of his previous exhibitions here) and any new artwork he produces is bound to be a talking point, even if this time one of the works makes literally much more of an .... erm ... point.

The works were created in response to his encounters with the bankers and financial traders of the City of London, as part of his exploration of contemporary masculinity for his latest Channel 4 series Grayson Perry: All Man.

Object in Foreground (on the left in the above image) is exactly what you think it is - an enormous glazed ceramic penis, embossed with the images of bank notes, designer objects and a collage of images of city workers. As Grayson Perry explains, "There's no disputing what it is. It's a big cock. I was thinking of an object that could hold its own amongst all the marble (of the City lobbies) but drew attention to the unquestioned maleness of its world. Men dominate the financial centre especially at the top so I wanted to make something that said it’s there all the time, it's the centre of gravity that's pulling us all in"

The other artwork, Animal Spirit, (on the right above) is a large scale print of a monstrous beast produced using the traditional woodblock technique of the printmaking artists of the Renaissance. As the inspiration for this, Perry explained "I've been interested in animal spirits as a euphemism for emotional over-exuberance in the market. I started of course with the two most common animals associated with the financial markets which are the bull and the bear…this is half bull, half bear but all male. The masculinity you see in the City is cloaked long ago under gentlemanliness and rationality and 'good business practice.' The beast still lurks but he's very well-behaved."

As part of the filming, the works were exhibited in The Shard, described by Grayson as the perfect place to display them.