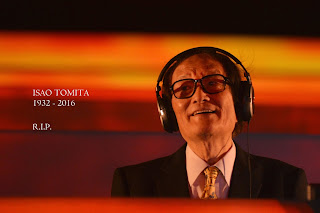 Widely regarded as one of the pioneers of electronic music and as one of the most famous producers of analogue synthesizer arrangements, Isao Tomita died last week at the age of 84...


An announcement by Nippon Columbia Co. Ltd on the composer's official Facebook page read as follows:

Isao Tomita, composer and synthesizer artist, died May 5, 2016 of chronic cardiac failure at 2:51 p.m. at Tokyo Metropolitan Hiroo Hospital. He collapsed around noon in his home and was taken to the hospital, where he passed away with family at his bedside.


Private funeral ceremonies attended only by family took place on May 7th and 8th. We announce this news with great sadness.

Tomita started his career as a composer for Nippon Columbia Co.,Ltd where he composed numerous works, including music for the first NHK Taiga drama and animation of Osamu Tezuka. In the 70's, he was among the first to introduce the analogue synthesizer to Japan and released numerous ambitious albums like “Snowflakes Are Dancing” and “The Planets.” He gained international recognition as the first Japanese artist nominated for a Grammy Award in the USA. Recently, he released “Symphony Ihatov,” featuring virtual singer “Hatsune Miku” as soloist, having many performances at home and abroad with much popular success. Just before his death, he was preparing the performance of his new work “Dr. Coppelius,” planned for November of this year.

We pray that his soul may rest in peace.

His dream with Dr. Coppelius was to create a synth soundtrack for a dancing hologram, to realize the dream of his ballet dancer (and rocket scientist) friend Hideo Itokawa who passed away in 1999 to dance a duet with a hologram. Speaking to The Japan Times last December, Tomita had said “My priority right now is staying healthy, but I’d like to finish ‘Dr. Coppelius’ as much as possible so that, even if something happens to me, others could finish it. Itokawa was a serious researcher who never gave up. That’s why I have to make his dream come true in some way.”

We can only hope that someone else does take on this poignant task now for both of them.