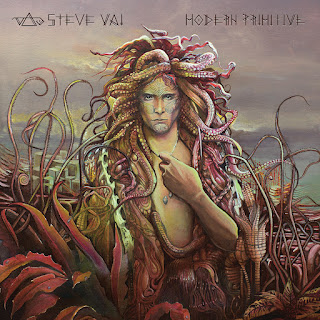 Steve Vai and Legacy Recordings are commemorating the 25th anniversary of Passion and Warfare with a special 2CD edition of the album which includes the first-ever release of Vai's Modern Primitive songs and recordings. Based on song sketches and works-in-progress penned and recorded by Vai following the release of Flex-Able, his debut album, in January 1984, the music on Modern Primitive has been completed by Vai for release as a full album disc and the 2nd CD is the bonus remastering of the Passion and Warfare 25th Anniversary Edition.

"The music on Flex-Able is so vastly different from Passion and Warfare, one could wonder if the same guy actually made both records," Steve writes in his liner notes for the collection. "Modern Primitive is the missing link between these two records. It's sort of Cro-Magnon Vai."

Modern Primitive / Passion and Warfare 25th Anniversary Edition is being released as a 2CD physical collection while each disc will be available as a separate title on all digital platforms.

In addition to the first-time release of his "lost" Modern Primitive music, composer/producer and electric guitar virtuoso Steve Vai will celebrate the 25th anniversary of his landmark album, Passion and Warfare, with a world tour starting on May 28th featuring—for the first time ever in concert—full performances of his groundbreaking instrumental rock masterpiece in its entirety. "Performing this record from top to bottom (with some very special surprises in the works) is something I've always dreamed of doing," Vai said. "There are songs here I've never performed before, and I'm delighted that 25 years after its release, I feel as though my guitar chops are as much up to the task as ever before."

Often cited as one of the greatest and most influential instrumental rock guitar albums ever recorded, Vai's Passion and Warfare was originally released through Relativity/Epic Records in September 1990 and has been certified Gold by the RIAA. Inspired by a series of dreams Vai had experienced as a young man, Passion and Warfare has been described by the artist as "Jimi Hendrix meets Jesus Christ at a party that Ben Hur threw for Mel Blanc." Recorded at The Mothership, Vai's home studio in the Hollywood Hills, Passion and Warfare includes the classic track, "For the Love of God," played here with the Holland Metropole Orchestra.

Steve Vai, age 12, picked up the guitar in 1973 and started taking lessons from Joe Satriani (another future guitar hero) shortly after. He soaked up influences ranging from Jeff Beck and Jimmy Page to Jimi Hendrix and Brian May and by the end of the 1970s, was transcribing guitar parts for Frank Zappa. He became a full member of Zappa's band in 1980.

Rapidly becoming one of the most in-demand, versatile, eloquent and soulful sidemen in the business, Vai recorded with Alcatrazz, Whitesnake, David Lee Roth and Public Image Ltd.

He launched his solo career with the release of Flex-Able, a homemade indie album, in 1984. Since 1990, he has recorded and released eight studio albums, eight live albums, two EPs, 12 soundtracks, 20 compilation albums, seven videos and more. Vai has won three Grammy Awards and earned 15 Grammy Award nominations. He has appeared as a guest artist on more than 40 albums, playing with artists like Alice Cooper,Ozzy Osbourne, Gregg Bissonnett and Joe Jackson, among others.