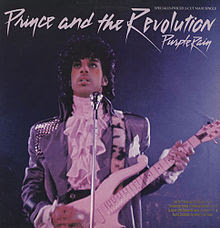 Susan Omand struggles to find the words, so lets the songs of Prince do the talking...

When I was 15 I had 3 posters on my wall. Simon le Bon, a Lamborghini Diablo and a poster from the middle of a magazine of a diminutive man in a purple suit and ruffled shirt, standing on stage with a white guitar, singing. Because that’s what Prince did. Before he became a squiggly symbol, before he became TAFKAP , before any of his outlandish stuff made him larger than life, Prince sang and wrote songs.

And he wrote some cracking songs, in fact he wrote 156 of them – songs that you may not know are his because the covers are better known. Remember Sinead o’Connor’s Nothing Compares 2U? That was Prince. Remember The Art of Noise and Tom Jones making a meal out of Kiss? That was Prince too. Chaka Khan’s I Feel for You? Yep that was also the purple one. Even Cyndi Lauper and Mariah Carey got in on the act with Prince covers.

But the one who did Prince songs best was Prince himself. You only have to listen to the 8 minutes and 15 seconds of the full album version of Purple Rain to know that. It is, was, and always will be my all-time favourite song. Not because of memories, although there are many, nor because it was the first song that I adored that didn’t “follow the pack” at school, although it was, but because of those words and that guitar and his voice. Nobody could ever do it justice in a cover version, and I know many have tried and will continue to try, such is the iconic nature of the song. But I will continue to switch them off and listen to the original.