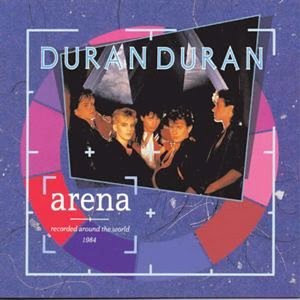 Song of the Day (SotD) is our choice of a single or album track that we think you need to hear. However, instead of the new music featured through the week, Saturday Throwback is a track from back in the day to kick off your weekend in style. We apologise for letting Susan Omand loose on the 80's record collection...

Yes, this was the track from the Arena album that finally put Simon le Bon's poster on my teenage wall. I loved everything about the song and, especially, the video - the industrial backdrop, animatronic head, flames, the Mad Max feel to the contraptions and costumes and that windmill that dunked Simon le Bon into the water.... yes.... especially that bit...

The idea for the song was conceived by the well known film and music director, and longtime Duran Duran collaborator, Russell Mulcahy. He wanted, initially, to make a full-length feature film based on the 1971 William Burroughs novel The Wild Boys: A Book Of The Dead and suggested to Duran Duran that the band might create a new soundtrack for the film, an idea he eventually used with Queen a few years later for Highlander. The full length film of The Wild Boys never materialised but the main song from the soundtrack, written by the band themselves, got a suitably surreal video that Mulcahy directed and was issued as a single in October 1984. The video did indeed borrow heavily from the Mad Max Road Warrior film, which meant that one end of the huge sound stage at Pinewood, normally used for Bond movies, was converted to house the elaborate set at a cost of over £1 million, an extravagant sum in those days to spend on a 4 minute video. So it's just as well it went on to win Best British Video at the 1985 BRIT Awards.

As for the song itself... well just listen. That oh so 80's bass. The stunning percussion work that carries the song, counterpointed by the harshly dissonant staccato keyboard chords. And Simon's voice, by no means perfect singing, but that rough edge, that crack in his voice in the high notes is so perfect for the atmosphere of the song and so difficult to replicate that you just couldn't imagine anyone else singing it.