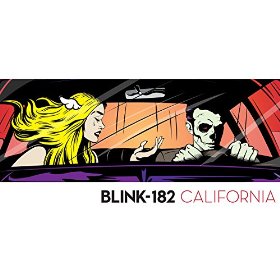 AlbieMedia's Song of the Day (SotD) is our choice of a single or album track that we think you need to hear. Today, Nate McKenzie listens to Blink-182, Bored to Death...

Released just hours ago, and true to their sound, Bored To Death is the new single from the Tom DeLonge-less Blink-182. But, for being a throwback track from a band I grew up worshipping, I can't say that I'm overly impressed. Not that it's necessarily bad; but when a band hasn't produced new music in five years I hope for something, at worst, revamped - not rehashed (See: my review of Weezer's new album).

Bored To Death is fresh but bland, like a lettuce-and-mayo-on-white-bread sandwich. Longtime fans will enjoy the song. Young people who appreciate veteran bands will love the "classic" 90s sound and the angsty, relateable lyrics. Hardcore devotees will love how the song makes them feel like (for better or worse) nothing has changed since 1997.

If Bored to Death is any indication of the rest of the album, then... I have no idea what the hell she is talking about.

I will probably listen to the song a few more times but I'm more interested to hear the rest of their upcoming 16-track album California when it is released 1 July (The 182nd day of the year. Clever.) Hopefully, there are a few tracks that have that have that retro-Blink sound mixed with a new flavor. I would love to be blown away by their ability to remain familiar but evolved like I was the first time I heard Feeling This or Miss You or Ghost On The Dance Floor.

Bored To Death left me far from being bored but certainly nowhere near blown away. There is something missing from this new track; maybe it's an energy or insight that DeLonge would have contributed, or maybe it's a cohesive bond the comes across in their music which Matt Skiba (DeLonge's replacement) may not be able to reproduce with his new bandmates. Whatever the reason, there's a hollowness to the song - although I don't anticipate that being indicative of the rest of the new album. At least, I hope it isn't.

For now, I'll just enjoy some Angels & Airwaves to hear that modernized-Blink sound to fill the void.

Listen here and let me know what you think: