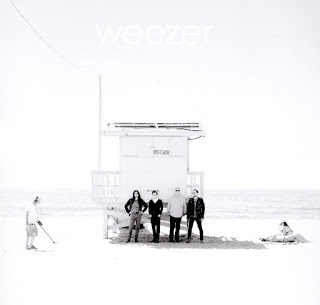 Rivers Cuomo is a voice that echoes in the memories of those of us that came into our formidable years in the 1990s. So, the release of a fourth self-titled album, known as The White Album, had a lot of people (myself included) excited.

Unfortunately, The White Album's sound is as bland as the cover art.

If you go back to 2014's Everything Will Be Alright In The End you only need to listen to the first two tracks to get a good dose of contemporary Weezer that still feels like classic Weezer. Ain't Got Nobody's heavy guitar riffs and Back To The Shack's inner-monologue epiphany harking back to their early days both showcased Weezer's ability the way their original albums did. Even if the rest of Everything Will Be Alright was superfluous, those first two tracks are terrific. However, simply knowing that they still have music like that in them is what makes The White Album so disappointing.

Everything about The White Album is as surface and shallow as a rain puddle. It's also just as murky in its message. Now, a collection of songs about living and loving in Los Angeles doesn't necessarily require depth or a significant "message" (nor does Los Angeles traditionally inspire anything more than that which is superficial) but we expect Weezer to do better.

I understand they have bills that need paid; but their fans have expectations that need met. The lyrics in White jump from loneliness/yearning for a girl to references from obscure Lewis Carroll poems (L.A. Girlz) and mentions of Charles Darwin (Wind In Our Sail and King Of The World). Of course, those more cerebral moments are as out of place as an academic at an LA fashion show after-party.

Rivers Cuomo's perpetually sad-sounding voice is not suited for the sort of peppy, vivacious songs that you find on the new album; rather, it is a perfect tool for teenage lamentations and sardonic commentary on the seedy underside of "LA in the sunshine". Unfortunately, we don't get to appreciate that on this album.

Most of The White Album sounds like B-sides to That Thing You Do. It is that trite.

There are a few (semi-)highlights on the album. I enjoy Thank God For Girls and (although I really shouldn't) King Of The World. Also, Jacked Up has a strange, unique quality to it that I can connect with.

Every song on The White Album is a continuous stream of fretful lyrics and repetitive beats that give the listener the feeling that the band is trying to get it over with as quickly as possible.

Which is exactly what I was hoping for.

If you're making a summer soundtrack playlist to listen to by the pool, mimosa in hand, or while out on the boat, any of the songs on The White Album will do.

Just don't expect much from it while on a late night introspective drive through the countryside.

If you want an album that works in either instance get a hold of a copy of Andrew McMahon's In The Wilderness. You're welcome in advance.

A quick breakdown of my thoughts on each track:

Wind In Our Sail - Contrived.

Thank God For Girls - At first listen feels cumbersome, but it grows on you. It has so much potential but tailspins before reaching an apex. There's no payoff. Still the second-best track on the album (which isn't saying much).

(Girl We Got A) Good Thing - They are trying too hard to be Rooney, with that SoCal effervescent 50s pop sound, but they never attain any measure of wooing.

Do You Wanna Get High? - I'm not sure what to say about this song. The girl is your drug? She buys the guy drugs? This song makes me want to take drugs to forget it.

King Of The World - Such a cliche song... yet I enjoy it. Even I hate myself for that.

Summer Elaine and Drunk Dori - How can you feel sympathy for a guy who is obsessed with two girls at the same time? Not that we haven't all been there at some point, but, that situation deserves no sympathy. And neither does this song.

L.A. Girlz - I like vanilla pudding, but not for every meal. Is my player on repeat? No. It's just that same damn sound again.

Jacked Up - The saving grace for the latter part of this album; the piano intro and Cuomo's screeching, straining falsetto makes this song the highlight of the album.