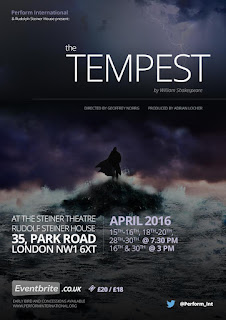 With all the Shakespeare400 celebrations firmly in mind, VentSpleen went to The Steiner Theatre in London to watch a new take on The Tempest by Perform International...


As part of the yearlong celebration of 400 years since William Shakespeare's death, there are a whole raft of performances going on in and around the capital, so if you are yet to see any of The Bard's plays performed as he intended them to be, now is a great time to do so. In my view a large number of people are put off ever going to see Shakespeare at the Theatre because of negative experiences at school. Shakespeare wrote plays yet so often schools ruin students’ first exposure to them by insisting they are simply read. This removes any of the dramatic nuance and dumbs down the brilliance of the word play so terminally that many never show interest again. Neither do I believe Shakespeare ever intended his plays to be scrutinised and dissected in the horrendous way that English Tutors seem to love doing. Who cares how the cadence rises and falls during Portia's wonderful speech in The Merchant Of Venice and who is even the slightest bit bothered about how Prospero's eulogy is relevant for us today? No one! Shakespeare wrote bawdy and earthy plays for the unwashed masses. They feature comedy and delinquent behaviour with a peppering of language that would make even the most open minded of individuals blush. I love Shakespeare but I imagine Shakespeare himself would deliver a hearty smack across the jowls to my English Teachers.

It is not my intention to review the story of The Tempest, there are shelves of books that will do that far better than I, but to focus on this production of The Tempest. As each director attempts to bring something new to the story of Prospero, surely this becomes an increasingly difficult task. So, as the house light dim and strange ethereal music begins to fill the auditorium we are taken to a ship on the high seas that is about to become a ship under the high seas...

Before that though, the music! In this production of The Tempest the renowned composer Hedi Pinkerfield has composed a score that features throughout the play. When I say throughout I mean that it's a constant companion to the scenes being performed. Strange, etheric sounds fill the stage and float around the audience and my immediate concern was that this would prove too great a distraction. My fears were unfounded as, once they are accepted, the almost otherworldly quality of the sounds and snatched riffs really succeed in underlining the spiritual qualities of the island. In the case of the opening scene, bangs and crashes from percussive instruments really do add to the image of a ship that is becoming an ex ship. Pinkerfield's sublime scoring throughout the play adds to the action and emotion on stage without ever threatening to overwhelm it. I have never seen a production of The Tempest which moves so successfully away from using period musical instruments of the era Shakespeare wrote in. A bold and strident move but one that really does work. 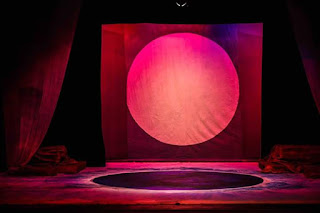 Once the play moves to Prospero's mysterious island, and the venue for the remainder of the production, the sparseness of the staging really becomes apparent. Geoff Norris as Director has made Shakespeare himself the main character in this production, in that it is his masterly plotting and scene development that holds sway and the audience’s attention. Too many times in past productions and, I would guess, with far larger budgets Directors have bamboozled and beguiled with effects and lavish sets. For me, this isn't what Shakespeare is about. It is the beauty of the words and phrases when partnered with the brilliance of performing the script that should always focus the audience’s attention. The responsibility of bringing The Bard to life once more is that of the cast and not a well stocked FX Department! The lighting effects are effective and sparingly used with most of the focus on the large backdrop with the sun/ moon being lit appropriately to accentuate the time of day. The use of actors to convey the drowning scene is effective and brilliantly portrayed with minimal fuss.

The cast for The Tempest are an international delight and expertly bring to life every emotional delicacy that is available to be tasted. This sounds like an overly flowery statement to make but it is one that is perfectly appropriate. Richie Donaldson's Prospero has the depth and emotional power of a man that has long ago slain his past demons but, and at the same time, demonstrates his world weariness. Here too is a deep love for his daughter, Miranda, and I delighted in the scenes where he lovingly tells the story of how they came to live on the island. Miranda, brought to vivid and stunning life by Italian actress, Elena Mazzon. I have enjoyed some of Elena's previous productions and always love the emotional intensity she brings to her performance. Samuel Mattioli's Ferdinand is simply a wonder and his dizzying, almost drunken stupor, on learning the news that Miranda is in love with him lit up the stage. Manish Srivastava is appropriately oafish as the slow witted, Calaban, yet evokes tremendous sympathy as a character who just wants to escape the shackles of slavery. Drunken comic relief is provided by Michael Claff and Alexander Yousri and their portrayals of Stephano and Trinculo respectively provided many comedic moments. The dastardly and quick witted Antonio is brought to acerbic life by Eshy Moyo and his scenes with Sebastian, Robert Land, are both funny and intense. Their planned betrayal of the irritatingly wordy Gonzalo, turncoat and weasel, is devious but perhaps understandable if only to cease the man’s incessant prattling. Ted Duran is strident and true in his performance of Alonso and it is his scenes with Prospero that provide an emotional resonance.

With this production every actor feels just as important as the next, regardless of the part they play in the story. Joanna Bodo portrayed the Lord with a wonderful assuredness and her performance as Goddess Iris was both breathtaking and seductively brilliant. Sahu Tao Shen brings a masculine and visceral quality to the role of Francisco, a reliable and accomplished man at arms you would want by your side. Special mention to Zita Konyari, who's singing during the wedding ceremony was truly stunning and elevated this pivotal scene to an entirely different level.

It is the decision to divide the central character, Ariel, into three that drew my particular attention. Lindsey Jacobs, Aisha Kent and Bowy Goudkamp are magnificent whether on stage as ensemble Ariel or divided into literally their separate elements (Earth, Wind and Fire) For me, this is a very welcome and innovative take on the mischievous Ariel and is one that is effectively performed. There were only a few occasions where Ariel's lines were obscured by three actresses speaking them together. Whilst this isn't a criticism of the three actresses, it is a risk of portraying the character in such a bold and original manner. Lindsey, Aisha and Bowy portray the individual dimensions to Ariel so strikingly and so individually it is a risk that I am delighted was undertaken and it brings an entirely new dimension to The Tempest.

This is an absolute triumph and the most effective production of The Tempest that I have ever had the pleasure of watching. I simply cannot find anything that I didn't enjoy about it! It serves as a glorious example of what can be achieved with a talented cast and assured direction to anyone that enjoys fantastic Theatre. I hope that those who had long given up on Shakespeare's work as a closed book to them will go and see this production. Perhaps The Bard’s work isn't as inaccessible as you had previously believed!

The Tempest is being performed by the same cast again at The Steiner Theatre - Rudolf Steiner House 35 Park Road, London, NW1 6XT from the 28th-30th of April at 7:30 with a matinee performance at 3pm on the 30th of April. You can book tickets on Eventbrite