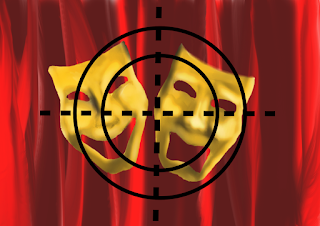 With the Olivier Awards fresh in our minds, Ventspleen puts out a plea for more people to embrace local Theatre as well as the big West End shows...

Earlier this year I read an article in which a well known and celebrated actor was bemoaning the state of Theatre. This isn't a new thing and actors both well known and, as yet, unknown have been banging the same drum ever since I can remember. As a child my annual trips to our local theatre were exciting evenings that I still remember and, as I grew up, so did my tastes. I started to see more than just panto and enjoyed a wide and varied programme of Theatrical treats and even dabbled in the odd amateur production myself. Funding for the arts has always been a thorny issue with government after government seeing the provision of money for theatre as a luxury that they could not afford. More on this later but this refusal to fund theatre and the arts in general has seen theatre after theatre close. It is now widely believed that Repertory Theatre is dead with the few theatres that still exist struggling to do so. There is a rich and beautiful vibrancy in our country that is more than just mere Shakespearean appreciation. The very reason we are seen as a country which produces some of the finest actors in the world is because of theatre and to see this demolished is something that fills me with abject horror.

This article was provoked by a recent trip to The Kenneth More Theatre to see a fantastic production of Forbidden Broadway given by an amateur theatre group. What I did not expect to see was a theatre auditorium with only 30 people on a Saturday night. Living so close to the West End I suppose I have been rather spoilt, and possibly misled, by the West End and the loud and ever popular shows that are plying their trade. Les Miserables celebrated its 30th Birthday last year and the award-winning Phantom Of The Opera will do the same this year. Theatre seems to have never been healthier and, with pre-bookings for the two Harry Potter stage plays anticipated to run for years, you would be forgiven for thinking this article is ill timed. Don't get me wrong, there is nothing wrong with enjoying the elaborate and expensive productions that the West End and Broadway has to offer but herein lies the problem. Theatre going should not be seen as the pastime for the rich and well to do, Shakespeare would turn in his grave if he saw what was happening today. Theatre is for everyone, yet it would seem large swathes of society have turned their back on the stage and for what? The immediacy of television, not new I would agree, but the ever increasing production values of shows like Game of Thrones and Doctor Who now mean that we don't have to get off our sofas to be entertained. Even cinema is seeing a down turn in attendance and, with the spiralling prices of tickets, people are turning more and more to viewing movies piped directly to their tech of choice. No one is going out yet we are still being entertained. Again, none of this is a bad thing in and of itself, but it does produce a lazy streak that is getting wider by the year. 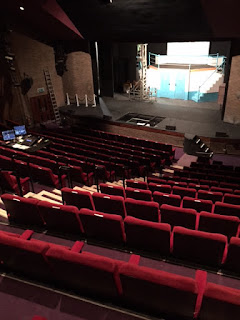 The main issue with the dwindling audience numbers is to do with a wrongly accepted understanding of the label "Amateur." If we refer to someone or something as amateur or amateurish we generally mean that it or they are sub standard. Therefore, when we see a theatrical production labelled as "amateur" the assumption is that its cheap or below par and its not worth seeing. Amateur Theatre is the true life blood of the arts, it is Theatre's very beating pulse. Amateur Theatre is production done simply for the love of great theatre, not for profit or for prestige but because the actors that tread the boards love doing nothing else. The thrill as the house lights dim, after hours of meticulous and sweat inducing rehearsal and learning of lines. The never ending tech rehearsal and notes from the Director, it is the "we are all in this together" spirit that makes all those hours seem worth it. Amateur Theatre is normally priced substantially lower than its West End equivalent and here is another area of assumption that is also incorrect. Cheaper does not always lead to the adage "you get what you pay for" I have seen terrible West End shows that have charge over the odds to deliver entertainment that is inferior to that you can see at an Amateur production. Assuming that because you have paid less for a production and because you don't recognise any of the cast that you will not be entertained is an opinion held entirely in ignorance. Indeed, it is these sort of assumptions that are leading to theatres closing their doors never to open again.

The Kenneth More Theatre itself, among many others, is under such risk with the threat of losing its entire arts funding in 2017. With audience numbers such as I witnessed on that Saturday it is hard to conceive of a way that it can continue to produce Theatre without something changing. Theatre lovers such as myself can hope, petition and plead to the Government to rethink their obtuse funding decisions but I don't hold out much hope that this can be achieved.  I think what needs to happen is a petitioning of a return of support from the general public and a challenging of pre conceived ideas about theatre itself. I am very aware that if  you are reading this article there is a high chance that you are as passionate about theatre as I am. Very much preaching to the converted! You may be even involved in Theatre yourself either as an actor or behind the scenes. We need to have the conversations that we spend hours on with others who do not share our vision and our fire. You know the ones I mean? Those conversations about productions we've seen, Tennant's return to Shakespeare, local theatre productions of Faustus or other shows. We need to have these sort of conversations with people who wouldn't dream of darkening a theatre's doors. Essentially we need to start discussing theatre with friends the same way we discuss films and TV, with the sort of people who don't even know where the nearest local theatre is much less what's on. If you can afford to, pay for a ticket to see a show and go with them. Enjoy the satisfaction of seeing their preconceptions and assumptions disappear as they actually enjoy live theatre for the first time in years. Like most things, local theatre is in the category of "use it or lose it"and if we don't see a significant shift in audience numbers and soon we will lose it and lose it forever.

A final note to you hard working thespians and other talented theatrical personnel. Quite simply, you are the people that are making the magic happen. Never once have I seen  disappointment in the eyes of an actor who is playing to a half empty house, you give of yourself for every performance and the love you have for theatre shines from your eyes. Never lose that love because its infectious and beautiful to see. I never tire of sharing your ardour and enjoying your talent. To audiences, don't just sit here and nod, get out there and make the effort because the actors are and its all for the love of theatre.