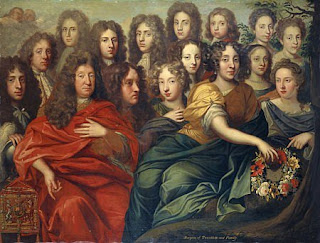 An extraordinary seventeenth century group portrait will be the focus of a new display, opening today at the Scottish National Portrait Gallery...

The oil painting by Sir John Baptiste de Medina (1659-1710) depicts John Hay, 1st Marquess Tweeddale (1626-1697), and his wealthy and influential family, who were at the heart of Scottish society and are now the subject of The Tweeddales: Power, Politics and Portraits.

This astonishing, congested and sumptuous painting is very unusual in that the artist copied existing portraits of the sitters to combine them all on one large canvas: the work shows the Marquess and his wife, Lady Jean, surrounded by their children, sons and daughters-in-laws and grandchildren. The captivating result is a montage of sitters whose ages do not relate to the date of the painting; deceased members of the family were included, such as two cherubs who represent children who tragically died in infancy.

Known as the Master of Yester until 1646, Tweeddale was the eldest son of the 1st Earl of Tweeddale and 8th Lord Hay of Yester, and Lady Jean Seton. Tweeddale studied as the University of Edinburgh, and as a young man served Charles I during the Civil Wars, although as with many noblemen in this period he changed his allegiances on several occasions in order to protect his rise to prominence – Tweeddale held many high profile posts at court and in parliament, including Lord High Chancellor of Scotland. His lengthy political career eventually ended because of his involvement with Scotland’s failed attempt to launch a trading company and establish a colony in Panama.

It is thought that Tweeddale himself commissioned the unique group portrait around the time he was made Marquess in 1694, as a bold statement to illustrate his successful rise to prominence and the dynastic continuity of his family. Tweeddale and Lady Jean, the second daughter of the Borders landowner the 1st Earl of Buccleuch, had thirteen children and members of the Tweeddale dynasty married into some of the most noble families in Scotland and England.

The Tweeddales will also explore the family’s role as patrons of the arts and architecture, which has often been overlooked by contrast with their contribution to politics and military life. The Tweeddale family were enthusiastic art collectors. Several works in the display were originally hung at family homes in East Lothian, Musselburgh and Yester House, near Gifford. Paintings on show will include works by both established and little-known artists such as Sir Anthony van Dyck, Sir Peter Lely and Gerard Soest.

Tweeddale’s passion for the arts was used to demonstrate his family’s wealth, status and power: the family spent large amounts of money on paintings, architecture and garden and landscape design. Five impressive late seventeenth-century paintings in particular, which depict the family mansion Yester House and its lavish gardens in great detail, illustrate this patronage and will be re-united in the exhibition for the first time in over forty years. These fascinating works, which are the earliest visual records of their type in Scottish art, show Tweeddale’s sophisticated taste and grand vision for his family’s home.

Christopher Baker, Director of the Scottish National Portrait Gallery, commented: “Through sumptuous portraiture the distinguished Tweeddale family were able to project their status and taste and convey a compelling sense of their wealth and social standing. This exhibition, which focuses on one of the most remarkable paintings in the Portrait Gallery’s collection, demonstrates the sophistication of late seventeenth-century Scottish society and its connections with European cultural trends.”

THE TWEEDDALES: POWER, POLITICS AND PORTRAITS runs from 23 April 2016 – 28 May 2017
Email ThisBlogThis!Share to TwitterShare to Facebook