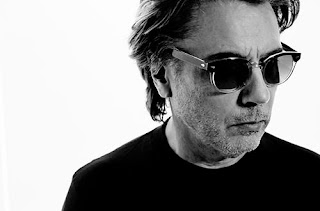 The collaboration came about after French electronic music pioneer Jarre gave an interview to the Guardian last year and asked if he could be put in touch with Snowden and calling him "an absolute hero of our times.”

“When I first read about him, it made me think of my mother,” Jarre continued. “She joined the French resistance in 1941, when people in France still thought they were just troublemakers, and she always told me that when society is generating things you can’t stand, you have to stand up against it. The whole Electronica project is about the ambiguous relationship we have with technology: on the one side we have the world in our pocket, on on the other, we are spied on constantly. There are tracks about the erotic relationship we have with technology, the way we touch our smartphones more than our partners, about CCTV surveillance, about love in the age of Tindr. It seemed quite appropriate to collaborate not with a musician but someone who literally symbolises this crazy relationship we have with technology.”

Jarre himself tweeted about Snowden yesterday.


Edward Snowden’s initiative should be an inspiration for others and for future generations @Snowden #EXIT
— Jean-Michel Jarre (@jeanmicheljarre) April 15, 2016

Have a listen to the track below, which Jarre describes as “hectic, obsessive techno track, trying to illustrate the idea of this crazy quest for big data on one side and the manhunt for this one young guy by the CIA, NSA and FBI on the other”courtesy of Guardian News & Media Ltd.

However this is not the only collaboration on Jarre's new album as 15 of the tracks involve work with some other great names.

The description of the album on Jarre's website says "The Heart of Noise is a tribute to Luigi Russolo who proposed in 1913 in his futurist manifesto the Art of Noises a number of conclusions about how electronics and other technology will allow futurist musicians to 'substitute for the limited variety of timbres that the orchestra possesses today the infinite variety of timbres in noises, reproduced with appropriate mechanisms'. Russolo states that 'noise' first came into existence as the result of 19th century machines."

Here's the full track list of the album, with the collaborators listed:

The album goes on sale on 6th May and Jean Michel Jarre is touring in the UK in October.