Review - Terrorvision: How to Make Friends and Influence People 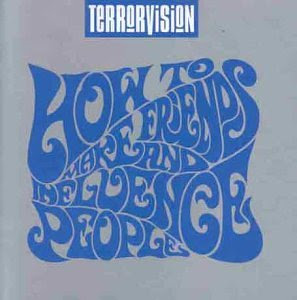 Steve Taylor-Bryant finds out How to Make Friends and Influence People by listening to Terrorvision...

There's something quite special about being drunk out of your nut and bouncing around a field in Cornwall with your best mates Vauxhall Nova stereo blaring out music. That's how I spent a lot of 1994.

Not necessarily in Cornwall.

We had almost come to the end of American hairspray rock, grunge had kicked off in style, but over here in Blighty there was a small group of bands coming to the fore with some great rock tunes and anthemic sing-along-a-drunk singles released. The Wildhearts had released the awesome Earth Vs The Wildhearts, Little Angels were still riding high, Gun had just released Swagger which is a hell of an album and then there was my go-to band for fun as well as musical talent... Terrorvision.

Terrorvision live in a club setting is an experience I'll never forget but Terrorvision in a field is something to behold! I'd been to a couple of the Monsters of Rock festivals before '94 but the second stage at Donnington at that particular year’s event outshone most of the mainstream rivals over on the main stage. Terrorvision were the highlight for me though and I'd nearly forgotten all about the boys from Bradford until it was announced they'd be at this year’s Beautiful Days...

The memories of 1994 led to me maxing out my latest iTunes voucher and I thought (because I can now I'm not 90's Steve any more. I even eat Kale) I'd share with you my love of Terrorvision's second album. So here's How To Make Friends And Influence People, track by awesome catchy track.

This could honestly be a song about anything and all my friends have a different interpretation but I like to think it's about a relationship that has some issues that the singer wants to get to the bottom of. Anyway it's a cracking opening to an album with some very heavy riffs and screaming vocals that get close to losing control. Intense and powerful opener.

"And do you feel your life is threatened by fabricated stories,
Dreamt up by the sons of campers that you killed back in the forties,
I could see that all the possibilities for conflict,
Could just back up your decision to subject them all to oblivion."

"I feel sad man 'cos we're victims of the victims,
Who don't give a damn, just say they're victims of the system,
They say, what's the point when the future's a thing of the past,
You might as well give in they don't build history to last."

Most definitely the most political song on the album with scathing commentary of what the government did to the north of England where the band are from. Musically it's very good with hooky bass throughout and beautiful distortion on the heavier parts.

"He's in the bar, he's in your hair
With his sports keyring jangling he's everywhere
He's in your view, he's in your face
Straight out of the seventies to straight out of place
His collars turned up high he's on top of the world
Sliding down the bar he's always falling, falling
With his one good eye he winks at what he thinks is girls
Opens toothless grin and then he's crawling, crawling"

One of my favourite songs on the album. Proper heavy rock intro, softer during the start of the verses, builds over the final section of a verse before unleashing mayhem on the chorus. Lyrically funny as we've all seen someone like this when out clubbing but a brilliant mosh tune too.

Slower in pace but with familiar Terrorvision riff quality is perfectly mixed with some orchestral moments and harmony which has some wonderful Beatles-esque moments.

"And we've all got sick with our cooler than thou,
Holier than shit attitudes,
Still the war goes on just drop the bomb,
There's nothing left to lose.
There's a bullet in this gun so you've got till,
the count of one before they shoot."

I could have been wrong in saying Stop the Bus was the bands most political song as Still The Rhythm is certainly a scathing look at the world in general however I'm still going with Stop the Bus as its more close to home. I'll also be honest I'm not the biggest admirer of Still The Rhythm. It just seems a bit like filler and is the weakest on the album.

"Times we spent cheating and lying,
Wondering when we would be back by your side again,
Hoping and praying to get through the day,
I need your attention to see through the fray.

It's night again all the time,
Shadows are lurking but I can't find mine,
People look at me as they flood through the door,
I need your attention not theirs anymore.

And the light from the candle goes dim,
as I slip deeper down from the brim.

The people are fading away,
As I slip into colours then ten shades of grey,
If I don't last this one tell them when I've gone,
That playing with you was incredible fun."

This is possibly the most elegant and beautiful song on the album. Beautiful in its construction, the bass, drums and guitars are perfectly balanced as they flit between acoustic loveliness and heavier moments. Again orchestration gives it a classy feel and it's the first vocal on the album that shows Tony Wright's ability to actually sing and not just rasp. A wonderful change of pace.

Stab in the Back

Stop right there, Stab in the back
There's something you ain't got
Yes you definitely lack, originality"

Rock stars then politicians followed by the media in the wake of Robert Maxwell's death all get the Terrorvision brand of anger here in a really funky sounding way. Effects pedals and 70's sounding percussion underneath great guitars add for a great difference in style.

"The wicked step father that took a step farther,
Played the patron saint in his shining armor,
With his sword of power and shield to protect you,
Tongue hanging out 'cause he's going to get you.

Pretend Best Friend (or when northern man tries his hand at rapping) is an awesome snapshot of what was happening musically within rock during this period. It's very Red Hot Chilli Peppers or Ugly Kid Joe in style but magnificent in its delivery and highly catchy. Very dark lyrics that come across almost tongue in cheek. Love the brass led quiet moments as well that break up the madness. Marvellous.

What the Doctor Ordered

This is a heavy track. If you take Wrights northern rap skills and raspy delivery and overlaid them to a Metallica track you wouldn't be far off What The Doctor Ordered. Magnificent.

Acoustic brilliance with a stunning string arrangement underneath and again proof (if it was needed) that Tony Wright is a hell of a singer.

What Makes You Tick

Back to the tick tock that started back before Alice What's the Matter and a song that rounds off a very strong album perfectly. Catchy Terrorvision riffs, heavy in places, Wright rasping, brilliant bass and driving drums. Excellent.

Now, I'm off to find Tequila. It makes me happy...