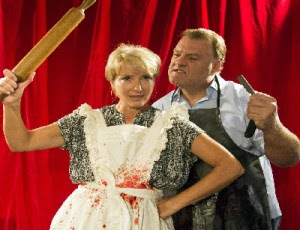 A couple of years ago, Tony Cross swapped chocolate eggs for pies and watched the ENO performance of Sweeney Todd, starring Bryn Terfel and Emma Thompson...

That's how to spend an Easter Sunday afternoon.

It's hard to imagine that something as theoretically dark as this - revenge, murder and cannibalism to name but three - can be so much fun. It's not going to end well this but then, as I said to my friend Dr Carrie, 99% of things you see at the ENO don't end well. But at least this one avoids having a consumptive heroine.

Anyway attend to the tale of Sweeney Todd, fitted up by nasty Judge Turpin so that Turpin can get his hands on Todd's beautiful wife. And then having finished with the beautiful wife moving on - rather creepily - to the daughter Johanna. Todd has returned to London from Australia where he was sentenced to stay for life.

Bryn Terfel plays Todd. It's a really stupid piece of obviousness to say but boy can Terfel sing. His voice, which seems to rise up with almost minimal effort, is fantastic, although I got the impression that he was dialling it down a bit as this wasn't Wagnerian opera but a Sondheim musical. I felt that if he'd really gone for it he'd have blown everyone off the stage.

He's not the best actor in the world but his physical presence is perfect for the brooding, vengeful Todd. It makes me wish I could have afforded to get a ticket to see him as the Flying Dutchman at the Royal Opera House.

Todd returns to his old haunts where he joins forces with Mrs Lovett, the sharp-minded, amoral maker of London's worst pies.

Emma Thompson is brilliant as Mrs Lovett, who gets most of the funny bits in Sweeney Todd. She's got a real presence and can sing a bit too.

Basically one thing leads to another and the next thing you know Todd's lining up to slay his enemies and Mrs Lovett is popping them in to rather wonderful pies for the unsuspecting population of London. They're great pies apparently - oh and 'A Little Priest' is I think my favourite song in the entire production.

Meanwhile a young sailor called Anthony - who we meet right at the beginning of our story with Todd - has fallen in love with Johanna and wants to steal her away from the horrid Judge Turpin. Turpin's got fantasies of marrying Johanna. Turpin's a bit of a git, basically.

So we're all lined up for a happy endin...oh, obviously not.

Terfel and Thompson (which sounds like a Welsh law firm) lead the line magnificently but the whole cast are pretty damn good and Doctor Carrie tells me are well-known musical theatre people.

Matthew Seadon-Young is a fine Anthony, Katie Hall is Johanna, Rosalie Craig the Beggar Woman - who gets involved in some rather unsubtle innuendo early on, Alex Gaumond is Beadle Bamford and Philip Quast is a magnificent Turpin. Oh and I shouldn't forget John Owen-Jones as the preposterous Pirelli and Jack North as Jack North.

Which covers pretty much everyone, which tells you how brilliant this was.

The orchestra are on stage here so the cast weave in and out, use the orchestra as props and generally behave as if they're part of the show. It's a bit odd initially but once you get used to it then it's fine.

Alas it was only on in London for a short-time (having transferred from Broadway), which is a shame as I'd happily go see it again.

So excellent was it I think it's knocked Guys and Dolls off the number one spot in the short list of musicals I've seen live on stage.

First published on Sound of Musicals
Email ThisBlogThis!Share to TwitterShare to Facebook