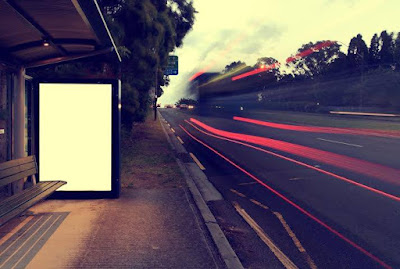 Martin Malcolm's play NightFlyer enjoyed a week at the Lion and Unicorn Theatre in London earlier this month. VentSpleen caught the final performance of the run...

Recently I decided to put my money where my mouth is and paid to see a piece of theatre that I knew literally nothing about. The Lion and Unicorn is a wonderful pub theatre that nestles in the leafy suburbs of Kentish Town and is fast becoming well known for hosting a diverse range of theatrical spectacle. NightFlyer is written by Martin Malcolm and inspired by a real experience he encountered while on a night out. As all good playwrights do, Martin took this encounter and expanded it into what would turn out to be one of the most stimulating pieces of theatre I had ever seen.

First impression when you enter the theatre upstairs is that of a sparse room which has very little defining feature other than space for the audience and the floor where the cast are to relay their story. I've always loved minimal theatre for its simplicity and back to basics approach but here can also be danger. As there is no room for gimmickery or effect, the play will stand or fall on the quality of the writing and the ability of the cast to connect with the audience. So, as the houselights dim and shadowy figures make their way onto the stage I settled back to catch the NightFlyer. 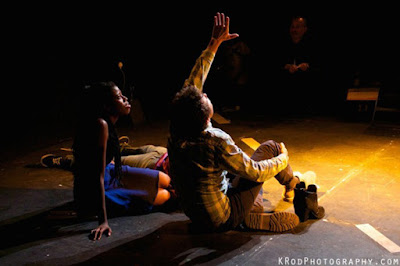 Spook (Jack Cottrell) has passed out and lies motionless on the floor, his friends are in a very inebriated state and, with only Jamster (Matthew Emeny) showing any concern for his welfare, it's not looking good for Spook at all. Blowtorch (Harvey Bassett) is more concerned with flirting with Chloe (Hannah Kelley) and Gennette (Anishka Klass) is of no use either. Right from the outset NightFlyer resonates with the audience and with anyone who has had a few  too many. A change of pub stimulates pack mentality and only the strongest survive with the weak being kicked to the kerb, its the law of the urban jungle. Blowtorch and Chloe's conversation about which nightclub they can get into next also triggered memories for me, there was always a list of nightclubs with differing levels of door policy, wasn't there? As the conversations become increasingly fractured, we learn more about the characters and their true motives. Each character has their own past and their own dark secrets and this central to NightFlyer's genius.

Plays or films about nights out that go desperately wrong are two a penny and they always seem vapid and lacking depth, often opting for the quick win or easy payoff. Rarely do you find yourself empathising with the characters or sympathising with their predicament. The exceptionally talented cast of NightFlyer manage to drag the audience on a frenetic ride of emotions that shifts loyalty and protagonist on more than one occasion. The decisive blow is provided in the final scene and is so impressively delivered that it hits you between the eyes with the force of a sledge hammer. Expertly handled by the assured direction of James Woodhams, who brings out every nuance and subtlety of the tremendous script by Martin Malcolm, it's not all dour and darkness and the occasional moments of drink induced hilarity are effective in adding to the realism of a typical night out.

The plays running length, at just under an hour, may look on paper to be a little short but I can assure you it feels longer and not in a negative way either. The audience is really drawn into the plight of the characters and the emotional development and connection is so acute that to make the play longer would be to labour the point. I have always admired actors that can successfully act drunk, as it is all to easy to over act horrendously and totally lack any realism. For a play that is centred around the drunken behaviour of the characters this would be impossible to ignore! NightFlyer's cast have avoided all such pitfalls and lurch from deep and heartfelt conversation to random distraction with professional assuredness. The sexual encounters between Chloe and Blowtorch are also handled with sensitivity and avoid any unpleasant over indulging. I am certainly no prude but this isn't the sort of play that needs explicit content and the cast do well to avoid it. 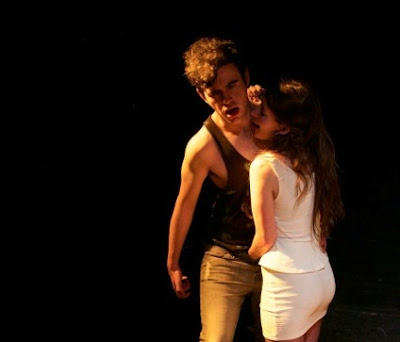 The strong west country accents are so realistically delivered by the cast that I was astounded to learn that they are not natural. Anyone who has winced through a poorly delivered regional accent will testify that this can ruin any enjoyment in a performance. In an age where diversity is championed above any other consideration, it is hugely exciting to see the ignored west country accents being so widely used in a play. Anyone who feels that such regional tones would alienate audiences should really think again as there was nothing here to detract from the power of the performances. NightFlyer is a play that packs a strong punch and will certainly not be for those with a weak disposition but, with the ever increasing cases of drink and drug related deaths, it has never been more relevant. The play conveys its message without being preachy or overbearing and deserves to be seen by much larger audiences.

NightFlyer is an accomplished and well written play that spotlights the huge talent of both Writer, Director and Cast alike. Newly graduating from Bath Stage School these actors will be seen and heard with increasing regularity and I for one will be following their careers with passionate interest. With talent like this emerging Theatre is in safe hands!

"It's gonna be carnage, absolute carnage!"

First published on VentSpleen
Email ThisBlogThis!Share to TwitterShare to Facebook