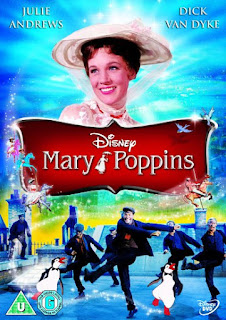 It would have been the 60th birthday of Matthew Garber today. Tony Cross watched (and sang along to) the film version of Mary Poppins...

I've seen Mary Poppins before but that was a long, long time ago when I was a wee lad bereft of the cynicism and grumpiness that seems to have come with adulthood. Since then I've managed to miss watching it many times and all it has become is a running joke about Dick van Dyke's accent, which I now realise is just stupid.

Mary Poppins is brilliant. It's jumped to top spot in my 'Favourite Musicals' list pushing Guys and Dolls off its perch. It's the first film musical I've seen where I've come out & bought the soundtrack pretty much straight away. It's a wonderful film. If you've got kids I envy you the joy of watching it with them. If you're an adult you should find time to watch it on a semi-regular basis.

Because this is a Disney film with children in it there's a tendency to think it is just a children's film but weaved into the story are some pretty adult themes: how work can grind, grind, grind you down and put distance between you and your family & how we all can trap ourselves in cages that can come in all sorts of shapes and sizes. Bert's comment to Jane and Michael to that effect when he's giving them his speech about what being a Dad is like basically says that. The ending of the film, when George Banks effectively breaks the door of his cage, reminds me of a Rumi quote, "Why do you stay in prison, when the door is wide open."

It takes Mary Poppins to show George the open door. It isn't the children Mary Poppins saves, its George Banks. In saving George, she saves the entire family but it is George whose cage is opened.

David Tomlinson is perfect as George Banks. He does a fine line in confusion, British stiff-upper lipped foolishness and when he finally escapes his cage does a great job of showing the weight lifting off his shoulders: the unbearable lightness of freedom.

Karen Dotrice & Matthew Garber play Jane and Michael. They manage to avoid being annoying, which is often how I feel about child actors. Garber does wide-eyed surprise with panache. Indeed there is a festival of face-pulling from a lot of the supporting cast.

But this film rises on two great performances: Julie Andrews and Dick van Dyke. Much comedy is had by British people about Dick van Dyke's accent, which clearly isn't very cockney. But you know it doesn't matter a jot. He's full of joy and energy. Apparent Dick van Dyke thinks he was miscast, but I think that's because he thinks a British actor would have made sense. Perhaps it would. Van Dyke suggested Jim Dale or Ron Moody. My friend Dr Carrie Dunn suggested Roy Castle. I think Dale or Castle could have done a brilliant job but Dick van Dyke's a joy throughout so I think he's wrong about miscasting.

Julie Andrews though is exceptional. Her Mary Poppins is practically perfect in every way. She sings wonderfully and acts brilliantly. She manages to make Mary Poppins mysterious without making her cold. Indeed to divert to my actual favourite thing in the world, Doctor Who, if you want to see what a female Doctor could be like say hello to Mary Poppins (and I'm not even talking about Missy's apparent theft of Mary Poppins' look for her current incarnation.)

The songs are great. I've been singing Let's Go Fly a Kite since I saw it. And found myself doing my own version of Step In Time on the tube homewards. Then there's Supercalifragillisticexpialidocious, A Spoonful of Sugar, Chim-Chim Cher-ee etc etc. It's clever too with a brilliant mix of animation and real actors.

So to cut a long blog short this is a jewel. Darker and deeper than you think. It's funny, moving and just plain wonderful. A reminder to us all to make sure we don't lock ourselves in our own cages and that, "In every job that must be done there's an element of fun. You find the fun and - snap! - the job's a game."

First published on Sound of Musicals