Review - Art of Scandinavia: Once Upon a Time in Denmark 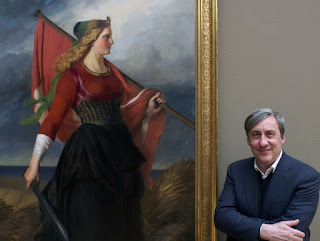 Ahead of the third and final programme on Monday, Susan Omand catches up with a few great Danes as she watches Art of Scandinavia: Once Upon a Time in Denmark...

When you think of Denmark, what do you think of? Bacon? Pastries? Football? (yes, we Scots are playing them in a friendly on Tuesday so I think of football). In “one of the most elegant theme parks in the world,” Andrew Graham-Dixon starts his art journey through Denmark at a fairground ride in the middle of Tivoli Gardens depicting the work of one of Denmark’s most famous sons, Hans Christian Andersen, where the brightly cheerful automata deep in an underground ride add an extra chill to the already dark fairy stories.

Going back into the history of the country, at the turn of the 17th Century King Christian IV was a powerful Nordic ruler and one of the most ambitious. The architecture of his red brick palace, Frederiksborg Castle, is influenced by the baroque and renaissance architecture of the rest of Europe. However, in order to get the craftsmanship he desired, he had to import skilled workers from Germany and the Netherlands. The interior too is incredibly opulent and packed with art but a lot of it was Dutch. The family history of King Christian IV was fascinating too and well presented as we looked at portraits, both Dutch and Danish, of the man himself, his first wife, who bore him 7 children in 9 years, and then his second wife who gave him 11 children in 13 years before having an affair with a German count, which “didn’t go down well” with the King who banished her and carried on with his own mistresses instead. Double standards methinks?

The chapel in the castle is very ornate and highly decorated with an ebony, silver and pure gold altar. Many famous religious scenes are depicted in the highly detailed metalwork. Hidden compartments within the altar show further etchings and even scenes created from marquetry. The King’s ambitious architecture, though, extended throughout the city of Copenhagen, including an “astronomical tower” with a spiral ramp instead of a staircase. His desire for astronomy was borne from his desire to navigate the seas and conquer the world. See, they said he was ambitious. However, it was not to be.

After the ambitious King, Graham-Dixon states that Denmark seemed to fall into a lull for almost 150 years until Hans Christian Andersen himself came along to awaken the spirit of Denmark again. It is little known that Andersen was also an artist as well as a writer. His art isn’t often displayed but the programme got access to view some of his papercut work, depicting golden swans and surreal humanoid windmills. There were also inkblot drawings, created by folding inked paper and then making something out of the blots. The thing that struck me they most about his work was the symmetry of the work. Everything seemed to be made from a folded sheet. I’m not sure what this says about his artistry or whether it depicts a need for balance and equality in his world, as he was well aware, in his writing at least, of the huge disparity between rich and poor in Denmark at the time.

Around the same time as Andersen, another Dane was, literally, preaching that everyone, men and women from every social class, should be given the key to education. He was Nikolai Grundtvig, the founder of the Danish Society. So successful was it that government spies were sent to report back on their meetings. 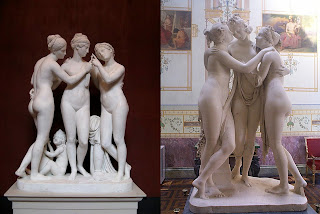 The rise of the ordinary man was epitomised by the 11 year old Danish boy, Bertel Thorvaldsen, who grew up to become one of the world’s most sought after sculptors of his day, making his name in the palaces of Rome before returning home to great adulation and the building of a museum in his honour. Thorvaldsen’s work echoed the Greco-Roman classical techniques although some criticised his work as being too static, even though that is the effect he was purportedly going for. I know that these are marble sculptures, therefore inherently “static” but I can see what the critics meant when I look at his work. Some marble work, such as Canova’s The Three Graces (on the right above with Thorvaldsen's statue of the same name on the left for comparison) or Bernini’s Apollo and Daphne have so much more movement and softness in them.

Not long after the Thorvaldsen museum opened in 1849, a gentle revolution wrested power from the monarchy and Denmark became a republic and, with it, came the (ahem) rise of artist Christoffer Eckersberg – watch the show to see his cigar box. At the time several young artists were given grants by the Danish Royal Academy to travel and gain inspiration for their work. Eckersberg was one of these and used his time to depict portraits of the populations of the places he visited, breaking ground by making portraiture not just a thing for the moneyed and well to do. The collection of this work at the Royal Academy, gifted by the artist himself to inspire others, contain some of the first paintings by a Danish artist of the naked human form. Never publicly exhibited, these men are not classical subjects or mythical heroes, just the life drawing that artists are so used to these days. They are not erotic or coquettish in any way. As Graham-Dixon himself says “I almost don’t think of them as nudes, they’re paintings of human beings who happen not to have their clothes on.” The female nudes would have been even more risqué and risky to display as, I was surprised to find out, it was against the law for many years for a female to pose nude for a male artist.

Female Danish artists also had their say in the nationalistic artistic representation of the country, one of the most famous being Mother Denmark by the Polish/Danish painter Elisabeth Jerichau-Baumann, depicting a Nordic heroine in jewel coloured clothes standing proudly with the Danish flag and ready to fight and conquer. And fight they did, although the Danish/Prussian war in 1864 was to prove their undoing with 8000 young Danes losing their lives in a single battle that lasted just two hours. 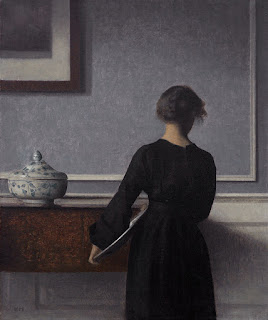 The post 1864 period, after the “golden age” of Andersen, Thorsvaldsen and Eckersberg, was captured by the striking work and, to me, most memorable of the artists featured in this programme, Vilhelm Hamershoi, a contemporary of Munch and Ibsen. He too had an uncanny way of looking at the world, a way that made even the most simple interior or mundane snapshot of life take on a somewhat sinister feel. People facing away from the viewer. Other objects in the foreground taking focus. Blank empty spaces in rooms all add to a feeling of mystery, introversion and unease. Wonderful stuff.

With the dawn of the 20th century, the country too started looking inwards, pulling away from the rest of the world, remaining neutral and taking time to put its own house in order. One cannot mention Denmark without mentioning Lego and, with a look at some of the Lego villages, this was the closest Denmark got to world domination, one small brick at a time.

The programme concluded though with 6 million real bricks and a look at one of the most beautiful buildings I never knew existed, the straight edges, sparse arches and clean lines of Grundtvig Kirke, named after the founder of the Danish Society and a monument to modern Denmark.

This was an interesting programme, although I think it concentrated more on the history of the country and the art was a byproduct rather than a focal point this time around and the amount of time spent on non-art subjects suggest to me that the “art of” idea somewhat ran out of steam after Norway, however maybe the third and final programme in the series will redress the balance. That said though, I now know of the work of Hamershoi and will give it further investigation, so the programme has I guess done its job of highlighting the lesser known art of Scandinavia. I am making the rash assumption, by the way, that the final programme of the 3 will be about Sweden, so I shall ask the question now. What about Finland?

The programme is available on iPlayer
Email ThisBlogThis!Share to TwitterShare to Facebook