Review – Art of Scandinavia: Dark Night of the Soul 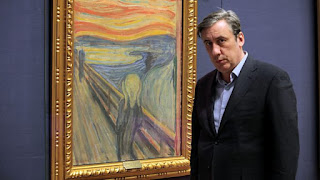 Susan Omand discovers there’s more to Norwegian art than a screaming Munch as she watches the first episode of Art of Scandinavia on BBC Four...

Norway. Probably not a place you think about as an artistic hotbed and, in general, you’d probably be right. However, this programme set out to shine a torch into the Shadowlands and highlight artworks and artists that you may or may not have heard of.

It did this by starting with an artist, and a painting, that everyone knows. Edvard Munch’s The Scream was first exhibited in 1895 and has become almost a parody of itself as an iconic image of mock horror. Even if you haven’t seen the real thing, you’ve seen a facsimile or rip off of it – think of the mask in the Scream films. Hell, think of little whats-his-face in Home Alone. The warped head, the wide eyes and mouth all (if you pardon the pun) scream terror. And yet, according to the series writer and presenter Andrew Graham-Dixon, it was painted as a symbol of overwhelming melancholy and loneliness, of the vastness of the universe, as Munch watched the sunset over the dark water on an evening walk in Oslo.

This affinity with nature is evident right from the dawn of time in Norwegian art and folklore, as the Viking art that Graham-Dixon went on to look at showed. Celtic swirls and strange animals abound in their jewellery and ornamentation fashioned from wood, bronze and even gold. Even when the Viking (which is actually a verb meaning to raid by sea) stopped and Christianity invaded the invaders, the “old religion” remained evident with carved dragons fighting for space with the multivarious crosses on the roof of a church that could only have come out of a Grimm’s fairytale such was its higgledy piggledy nature. Even inside the church, which looked like a banqueting hall out of Beowulf, along with the Christian iconography there were carvings of snowcats and a mask suspiciously like Odin, the old Norse god who was blind in one eye.

But the Norwegians had little time for more art, being more intent on survival at a time when the medieval population of the whole country could have fitted into Wembley Stadium. This also fitted with the new Protestant Lutheran religion that came along with the reformation in the mid 1500’s where worship of God was an inward thing, churches were bare and windows were clear glass so that one could marvel at His good works in the surrounding landscape. However, with the reformation came a movement of counter-reformation from the Catholic church and one of the few Scandinavian priests at the Vatican, Olaus Magnus, set out to encourage the church to go and “reclaim” Norway from the Protestants by writing a lavishly illustrated book called, A Description of the Northern Peoples which mixed fact with myth, trying to “sell” the country in the same way a tourist brochure would do it these days. This followed his detailed quite stunning map from a few years earlier, the Carta Marina, which, quite honestly looked like something Grayson Perry would do now, with the seas filled with colourful serpents and the mountains filled with ravenous beasts, which I think would have put off travellers more than encouraged them. 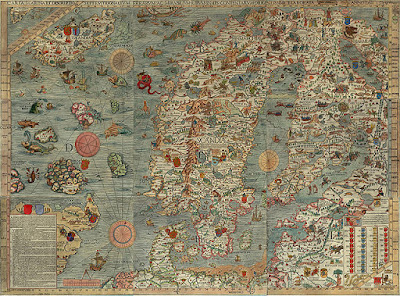 Indeed there were very few travellers to Norway until the late 18th century when it started to be explored by the English, French and Germans. This led to a rise in the landscape paintings and of particular note, in the programme, was the work of Johan Christian Dahl, sponsored by local merchants to go and learn his craft in Dresden. He is seen as the father of Norwegian Landscapes and the first of the Romantic Nationalists as the Norwegians sought imagery to rally around as they fought politically for their freedom from, first Denmark, where they had long been a colony, and then from Sweden. The romanticised nature of these rugged landscapes hid the true nature of industrialisation and a population boom which led to suffering and poverty overcoming the Norwegians, forcing the people into the cities, or even abroad, to look for work so that much of the country dwelling culture was lost.

One man who managed to help the workers, as a political activist and the founder of the Trade Union movement, as well as recapturing a new way of looking at the Norwegian landscapes as he travelled into the northernmost regions up the west coast was Peder Balke. This was an artist I knew nothing about before the show but he is one that I will research more on as his work totally captivated me, with towering monolithic mountains, tumultuous skies and boiling seas all in a very limited palette. They only showed the pictures for moments on the screen but to see the vividness of the aurora borealis captured in almost monochrome sweeping paint sent me to Google to seek out more. I found that one (below) but also look for Stormy Sea and Stedtint i Take and pretty much anything else he has ever done. Stunning work! 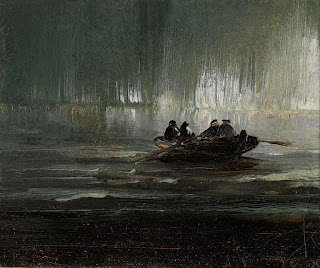 As well as painters though, the Norwegian landscape, its people and their affinity with nature has influenced other artforms including photography, poetry and plays and the programme covered these as well. The most notable of these was playwright Henrik Ibsen, who made the most of the new existentialism and atheism brought about by the work of those such as the Dane, Soren Kirkegaard, who questioned faith and challenged the old certainties. Ibsen played upon the anxieties of the populace left with the thought that the universe was without meaning or purpose and what Ibsen wrote, his friend Edvard Munch set out to paint, bringing the programme full circle.

A fantastic start then to this short series. Easy to understand and not at all high-brow or technical, there was enough information for everyone to get something out of it and not be bored because it covered other subjects in addition to the art. But if, like me, it was the art you were interested in, it didn’t feel “dumbed down” in any way and presented more than just the easily recognisable or expected works and, even with those, new facts and a different perspective kept me watching. The show is available on iPlayer for the next few weeks and I highly recommend you giving it a watch, if only to see the fairytale church with dragons on the roof.