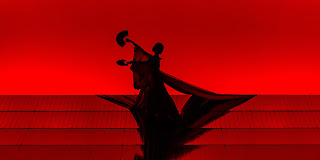 Described by The Times as ‘one of the most deeply thoughtful and ravishingly beautiful re-creations of Puccini’s opera that you’re ever likely to see’ Anthony Minghella’s stunning production of Madam Butterfly returns to ENO for its sixth revival.

This is the first and only opera directed by the late Anthony Minghella and his wife Carolyn Choa, who assisted him as choreographer and associate director. Best known for his work in film, Minghella won an Oscar for his film The English Patient and a BAFTA for The Talented Mr Ripley.

Madam Butterfly is one of opera’s most enduring tales of unrequited love. With its breathtaking mix of cinematic images, traditional Japanese theatre, colourful costumes and stunning sets, Anthony Minghella’s Oliver Award-winning production has been hailed as’ The most beautiful show of the year’ (Sunday Telegraph).

Acclaimed British conductor Sir Richard Armstrong conducts his first Puccini opera for ENO. Formerly Music Director of Welsh National Opera and Scottish Opera, his recent appearances at the London Coliseum include five star productions of both The Passenger (2011) and The Makropulos Case (2010) and the revival of Calixto Bieito’s Carmen (2015).

Soprano Rena Harms returns to ENO to make her role debut as Cio-Cio San. She previously performed the role of Amelia in Dmitri Tcherniakov’s production of Simon Boccanegra for the Company in 2011.

British tenor David Butt Philip makes his role debut as F.B. Pinkerton. He was last seen at ENO as Rodolfo in Jonathan Miller’s production of La bohème in 2014, with The Guardian commenting on his performance that he was ‘a Rodolfo to treasure’.

Expert puppeteers Blind Summit, (whose other work with the Company includes Sharik the dog in Simon McBurney’s production of A Dog’s Heart) portray Butterfly’s and Pinkerton’s child in puppet form, inspired by Japanese Bunraku theatre. The production opens with visually stunning choreography devised by Carolyn Choa which utilises the tradition of the Japanese fan dance.

Sarah Tipple returns to ENO to direct the production for the third time. Sarah has previously worked on the sell-out UK and South African tour of Dirty Dancing. Her previous projects have included The Marriage of Figaro for Opera up Close at the King’s Head and the acclaimed Barbershopera. She was shortlisted for the Arts Foundation Fellowship in Theatre for Directing in 2009. In 2008/9 she completed a year-long residency at the Young Vic.

Pre-performance talk: Wednesday 18 May 5.15-6pm, £5/£2.50 concs.
A co-production with the Metropolitan Opera, New York and the Lithuanian National Opera.