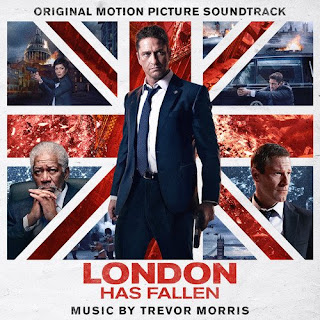 Back Lot Music has released the soundtrack album to Gramercy Pictures' London Has Fallen...

Like its predecessor,Olympus Has Fallen, the movie's soundtrack album features a new score by double Emmy Award-winning composer Trevor Morris.

When discussing his score for London Has Fallen and working with director Babak Najafi, Morris said, "When I started to collaborate with Babak, the process was instant and effortless. It really felt like we had worked together on many movies before this, despite having just met. Babak has a very immediate response to music and how it works with the narrative. I would send him scenes or reels, and get the e-mail back from him: 'You made me very happy today.' As a composer, that's the moment, that's the reward for me in my process: knowing that you told a great story through music, and that you and your director are in sync."

Morris has composed the music for more than 15 feature films, 25 prime-time television series and 5 interactive game titles. He is largely known for his period TV work on such shows as The Tudors, The Borgias and, presently, Vikings; the first two earned him Emmy Awards for Outstanding Original Main Title Theme Music. He recently completed the third instalment of the Dragon Age video game franchise for EA, which was awarded Video Game of the Year in 2015. Morris also conducts his own scores, including London Has Fallen, at the iconic Abbey Road studios in London.

The sequel to the worldwide smash hit Olympus Has Fallen, London Has Fallen is a non-stop, suspenseful action thriller that delivers high-octane excitement through a heightened sense of authenticity. The visceral intensity springs from a timely premise: after the British Prime Minister passes away, his funeral becomes a target of a terrorist organization to destroy some of the world's most powerful leaders, devastate the British capital, and unleash a terrifying vision of the future. The only hope of stopping it rests on the shoulders of the President of the United States (Aaron Eckhart) and his formidable Secret Service agent (Gerard Butler), and an English MI-6 agent (Charlotte Riley) who rightly trusts no one. Morgan Freeman also stars as the Vice President of the United States.