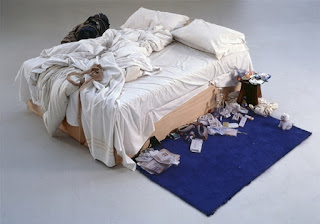 Tate Britain launches their new series of Late at Tate Britain for 2016 inspired by key artworks including Tracey Emin’s ‘My Bed’...

Late at Tate will return to Tate Britain this season with a new series of free events curated by young people. The gallery will open up on the first Friday evenings of April, June, August, October and December for specially curated late openings featuring music, live performances and workshops. 2016’s series will be inspired by key works in the Tate Collection. The first event will be based on Tracey Emin’s My Bed, currently on loan from the Duerckheim Collection, and will feature events and performances themed around ‘the bedroom’.

Late at Tate event is curated exclusively by 18-25 year olds from Tate Collective London who produce a range of free events and festivals for young people to experiment, create and innovate through art and ideas. Late at Tate is part of the Circuitprogramme, led by Tate and funded by Paul Hamlyn Foundation. Circuit is a national programme that engages young people in the arts with a focus on encouraging those with least access to galleries and museums.

The series will kick off on 1 April with an evening themed around Tracey Emin’s seminal work, My Bed (1998), which is currently on display in Tate Britain’s Tracey Emin and Francis Bacon room. For this event, artist collective Bedfellows will create an informal performance-based discussion work where they will tackle themes in Emin’s work such as sex, desire, consent and relationships. The event will also include performances by artists who usually make music in their bedrooms - local producer Pokovsky and London-based collective 404. ‘Laid Bare’ zine-making workshops by artist Rudy Loewe will also encourage the audience to explore their own truths about sexuality and gender.

Mark Miller, Circuit Programme National Lead said: “We are really looking forward to seeing how Tate Collective bring together an evening of creative ideas inspired by Emin’s My Bed. It is a great way to start an artistically diverse new season of programme and we look forward to connecting with diverse new audience.”

Late at Tate is a free, drop-in event. Spaces are available on a first come, first served basis. At this event, street food will be available.

Special offer: 50% off current exhibition tickets for under 25’s on production of valid I.D (last entry 21.00).