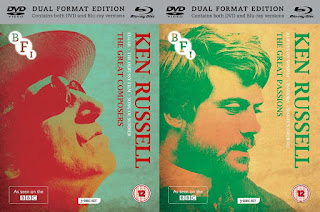 The BFI will release two collections of Ken Russell arts and music documentaries at the end of March...

On 28 March 2016 The Great Composers and The Great Passions will be released together on DVD and Blu-ray in a Dual Format Edition by the BFI.

The first collection by ground-breaking director Ken Russell (Valentino, The Devils) were originally broadcast in the BBC TV arts documentary strands Monitor and Omnibus during the 1960s and look at the work of the classical composers Elgar, Debussy and Delius. Each film has an audio commentary, and in a new filmed interview, film editor Michael Bradsell talks about working with Ken Russell. Also included is rarely-seen archival footage of Sir Edward Elgar.

Elgar (1962), Russell’s tribute to the music he loved, is remarkable for its sensitive portrayal of the rise of a young musician from an underprivileged background to international fame. The Debussy Film (1965), co-written by Melvyn Bragg, is a truly experimental work that culminates in a sublimely ethereal finale. Perhaps the finest of Russell’s 1960s biographical BBC productions, Song of Summer (1968) is an immensely moving story of sacrifice, idealism and musical genius which charts the final five years in the life of Frederick Delius.

As a companion to this musical set of documentaries, the BFI are also set to release Ken Russell The Great Passions.

Always on Sunday (1965), a dramatised exploration of the naif painter Henri Rousseau, sees Russell reunited with Melvyn Bragg and Oliver Reed in one of his most charming and delightful documentaries. Isadora (1966), Russell’s exuberant study of the outrageous American dancer Isadora Duncan, is probably the film that best encapsulates the director’s attitude to art and creativity. In Dante's Inferno (1967) Oliver Reed gives a smouldering performance as the Pre-Raphaelite poet and painter, Dante Gabriel Rossetti. This startling and bold film is one of the most ambitious that Russell made for the BBC.