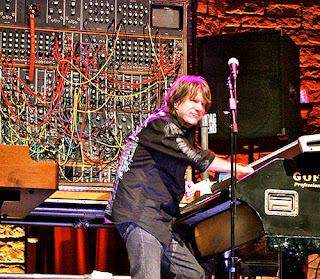 The Emerson, Lake and palmer official facebook page announced the news saying only, "We regret to announce that Keith Emerson died last night at his home in Santa Monica, Los Angeles, aged 71. We ask that the family’s privacy and grief be respected."


I am deeply saddened to learn of the passing of my good friend and brother-in-music, Keith Emerson. Keith was a gentle...
Posted by Carl Palmer on Friday, 11 March 2016

Widely regarded as one of the top keyboard players of the prog rock era, Emerson found initial fame with The Nice in the 1960's, recording numerous albums and appearing in a notorious concert at London's Royal Albert Hall. He also became the first artist to tour with The Moog synthesiser internationally with the help of its inventor, Dr. Robert Moog, although others had used one in studio recordings, nobody else had taken one on the road before. In 1970, The Nice broke up and Emerson formed the legendary group, Emerson, Lake & Palmer (ELP) with bassist/vocalist Greg Lake and drummer Carl Palmer. They achieved instant fame with their debut at the Isle Of Wight Festival in 1970. ELP released six platinum albums between 1970 and 1977, including E, L&P, Tarkus, Trilogy, the cryptically entitled Brain Salad Surgery, Welcome Back My Friends To The Show That Never Ends and Works Vol. 1. They headlined the massive 1974 festival California Jam playing to an audience of over 500,000. Later in 1977, ELP toured with a handpicked orchestra, which performed Emerson's Piano Concerto No. 1.

Since then, he continued to be involved in the music industry, with ELP reuniting in 1992 and the release of the critically acclaimed Black Moon. Subsequent world tours resulted in the live performance releases of Live at the Royal Albert Hall in 1993 and Then And Now in 1999.

Even very recently he was actively involved in a documentary based on his autobiography, Pictures of an Exhibitionist, written back in 2003, after he underwent surgery on his hands. This documentary adaptation wanted to go back to interview the characters in his life from his childhood to today and is currently crowdfunding in order to get the film finished. You can find out more about it and make a contribution here.