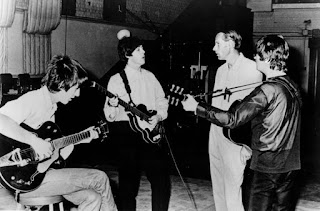 He is credited as the man who signed the Beatles in 1962 to a label contract when no one else would, producing virtually all their songs.

Even though he became known as The Fifth Beatle, Martin produced recordings for many other artists, including contemporaries of the Beatles, such as Matt Monro, Cilla Black, Gerry & The Pacemakers, Billy J. Kramer & the Dakotas as well as guitarists Jeff Beck and John Williams, Gary Brooker, Neil Sedaka, Ultravox, and even Kenny Rogers, Elton John and Celine Dion.

Martin also produced two of the best-known James Bond themes. The first was Goldfinger by Shirley Bassey in 1964, and the second, in 1973, was Live and Let Die by Paul McCartney and Wings. He also composed and produced the film's score. No stranger to the cinema, he also worked on other films like Crooks Anonymous (1962), The Family Way (1966) and Pulp(1972), which starred Michael Caine and Mickey Rooney.


A Universal Music Group spokesperson confirmed Martin's death, though details are not yet clear.