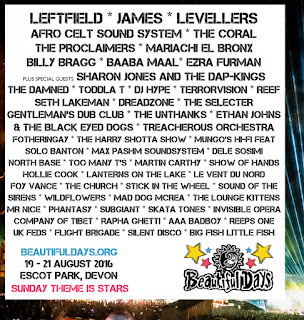 The line up for Beautiful Days 2016 has been revealed...

Headlining the festival on the Friday night are Leftfield – one of Britain’s most influential electronic dance acts. Their debut Leftism, remains one of the defining statements of 90s dance music. Headlining on Saturday night we welcome back Manchester legends James who release their fourteenth new studio album ‘Girl at the End of the World’ this month. Sunday night headliners are festival founders Levellers who will close the weekend with a spectacular show including a firework finale.

Beautiful Days started in 2003 and is an annual weekend camping music festival which takes place in Devon. The festival was founded and is managed by the Levellers and organised by DMF Music. Beautiful Days is a family-friendly weekend camping event attended by people of all ages. Tickets for 2015, the 13th festival, sold out 3 months in advance. Tickets for the 2016 event are on sale now and the line-up has been announced. The festival has music and entertainment across six stages plus a children’s area in the centre of the festival for toddlers through to teens, walkabout theatre, site art installations, comedy, theatre, family camping, food & craft stalls, healing area, play areas and real ale bars. The focus of the day on the Sunday will be stars, with site art and other elements of the festival reflecting the theme.