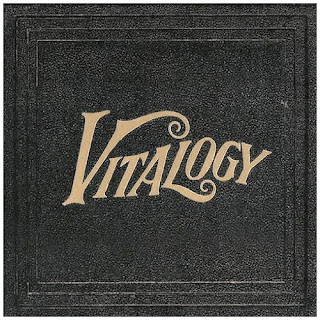 Steve Taylor-Bryant sets out to re-educate the masses yet again with Pearl Jam's Vitalogy...

I really don't purposely go out of my way to go against popular opinion, it's just that so many of you are so wrong a lot of the time. Obviously I'm just kidding, but we do disagree quite a lot. After my opinion of Chinese Democracy as the best of the Guns 'n Roses back catalogue, and your vilification of said opinion, I was going to leave you alone. Honest! I had no intention of showing your wrongness publicly again but then, after a rumour surfaced that Pearl Jam may headline the Pilton Pop festival (or Glastonbury if you prefer to be geographically inaccurate), you all started chipping in on social networks with your lists of favourite Pearl Jam albums. To be fair to you the top two in my very unscientific research (basically just tutting a lot and shaking my head) seemed to be Ten and Vs which are both very good releases and contain some excellent songs. What distressed me the most though is that I found no mention whatsoever of the actual best Pearl Jam album, so let's rectify that right here right now.

Vitalogy came about at a time when maybe fitting in recording sessions was misguided. The band had found global acclaim and were still touring Vs, becoming tired in the process. There was a writing shift in the bands dynamic with vocalist, Eddie Vedder, taking more control of the content which had been mainly Stone Gossard and Jeff Ament's responsibility previously. The band were just starting a massive fight over live shows with market leader Ticketmaster, communication within the group was becoming a chore with drummer changes throughout the period, and drink and drugs were affecting the band. When you read all that it's difficult to imagine how anything got done at all but all of the above had an impact on the songwriting and produced gem after gem. Darker lyrics about privacy and pressure led to some critics wishing the band would cheer up but that is missing the entire point of Vitalogy, which was a band reacting to the situation they found themselves in. As a child you may dream of global adulation but the reality of never being left alone I imagine would be incredibly distressing. The music had an edge not previously shown with Ten and Vs. Gone were romantic sounding guitar solos and in its a place an almost punk feel, tight and fast paced songs full of attitude with slower tunes having a genuine feeling about them, not a ballad for a ballad's sake. Some tunes were indeed experimental in their sound but instead of dismissing these as bad songs (one review in the 90's actually called them a 'stinker') surely a band should be congratulated for trying something new, for trying to evolve? The album, first released as a vinyl with a beautiful book like quality in its packaging, was the first of the band's to lead to a single winning a Grammy and, up until Jack White in 2014 released Lazaretto, held the record for first week's sales for a vinyl record. 18 years! If all of this information that, let's be honest, you could have googled if you were that bothered, isn't enough let's look at the songs.

Fans and critics alike have long pondered if this song is about Kurt Cobain taking his life and it is easy to see why. The dark tone of the song sort of screams suicide and the lyric

does lend itself to the tragedy of Cobain who wasn't discovered for three days. However the song was written before his tragic demise and Vedder categorically denies it's about the Nirvana frontman. Musically it's a solid start to the album with punchy drums and very rhythmic guitars complimenting Vedder's dark soulful words.

The single that won Pearl Jam their first Grammy is a tribute to vinyl records that at the time were starting their descent into obscurity and is a very welcome punk edged powerful tune.

A hard one to get underneath lyrically although I do think it was Vedder lashing out at the press about the intrusion into his life. Vedder sounds frustrated whilst singing and what would have been merely an almost acoustic filler piece comes to life with the angry delivery of the lines.

Tremor Christ opens up lots of personal anguish in me. Some think the song is about religion and for a while I did too, but the more I listen now as a clean man, I can see a lot of my drug addiction wrapped within the lyrics. 'Little secrets, tremors... Turn to quake' to me is when your secret battle starts to manifest in public. When you try and kick drugs many things happen physically and mentally and the detoxification tremors are slight at the start before building to whole body wrenching. 'Ransom paid the Devil... He whispers pleasing words' remind of the deals I'd secretly partake in to get my drug of choice and I get shivers every time I hear the line.

This for me is when you mentally accept you have a problem and give up. Maybe not a song for everyone but possibly one of the only songs to have a lasting effect on me and that's what you want from music isn't it?

This is beautiful musically. A soft and wonderful ballad with excellent brush work on the drums but, if you want darkness with your beauty, just let the words seep into you. Eddie Vedder explains it better than I... '"Nothingman" is about a troubled relationship. I wrote it before I was married. I might bring something I know from the relationship to "Nothingman," but I'm thinking about someone else going through it, someone who fucked up. I didn't fuck up. The idea is about if you love someone and they love you, don't fuck up... 'cause you are left with less than nothing"', Eddie Vedder

One of my favourite Pearl Jam tracks of all time. A rock edge, superb cymbal work and driving bass which drops into some quiet moments before building again and again. Vedder's voice has a controlled raggedness about it and his delivery is impeccable whether it be the harsh staccato words or the held notes of the title. Superb!

Pry, To is 15 seconds of Vedder spelling privacy and is more of a statement than most other press intrusion songs. Apparently if you play it backwards it's about Pete Townsend of The Who. I've never played it backwards.

Corduroy is about how the media now see Vedder as 'Pearl Jam frontman and Rock Star' not Vedder a man. He once bought a corduroy jacket and, within days, people were selling similar ones at rates a lot higher than they should have been. Possibly the only song musically that would actually fit on any Pearl Jam release. Not my favourite but not weak by any means.

This song was slated at the time but I like the experimental nature of it. It's certainly different but that's not a bad thing. People were expecting a Pearl Jam song and got something else. These critics must have hated The Beatles.

This is a groovy little track. I can imagine dancing badly to this song in a festival field. Lyrically another 'fuck off' to the media that try and foist young model types on him when he's already happily married.

For a stunningly upbeat sounding song this is again lyrically dark and covers domestic abuse. Just listen to it.

This translates as pretty woman and is just instrumentally incredible to listen to and the chanting is beautiful. Flows well into...

There are two schools of thought on this song. With the cigar box mention we go back again to Cobain's suicide but the other is, apparently, that it is about the plight of native Americans. Make your own minds up but you'll find another song where Vedder sings with such elegance.

This is either incredibly creepy or incredibly clever and another you are going to have to make your own minds up about. Using mental hospital patients interviews is brave beyond words and dare I say the most unique 'song' I've ever heard. I put song in inverted commas as I'm still not sure it classes as a song in the traditional sense despite there being music and a beat from beginning to end. It's a thinker. Personally I love it, it's weirdness and its audacity.

So there we go. Not one weak song, a different album to the first two and maybe not commercially as accessible as Ten but a band evolving, a band experimenting in both songwriting and in life, and a band that stuck to their guns and released what they wanted despite pressure to reuse a winning formula from previous releases. Marvellous to listen to and incredibly brave when you dig beneath the surface.