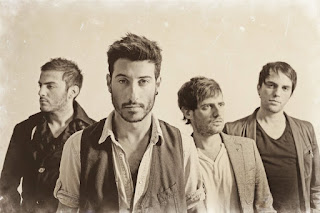 Sometimes things just happen. A message pinged across the AlbieMedia Facebook page urging us to listen to a band called Airport Impressions from Malta of all places, who are set to come to the UK on tour later this year, and attaching the YouTube video for their song Walk With Me. The band name didn’t really hook me in if I'm honest but I listened to the song anyway and I was blown away by their sound. So I got back in touch with the PR company to see if I could hear more of them and got sent the whole of their second, and latest, album Mariette from 2014. Believe me, you need to listen to these guys and pay them some close attention.

To give you some background, Airport Impressions are based in Malta and started out as a duo of singer Errol Sammut and guitarist Johann Schembri. After spending time in Ireland back in 2005 they found a new slant in the way they went about writing songs and these Celtic influences gradually grew as the band also grew into the current four-piece line-up, with bass guitarist Chris Curmi and drummer Steve Farrugia’s roles proving essential in helping the band find their unique sound.

There are 12 tracks on Mariette, the majority of which are slower, almost acoustic in melody, and ballad-like tracks which do serve to showcase Errol Sammut’s voice very well. I could listen to him sing all night anyway, his voice has a rich depth while still maintaining that gravelly edge that the likes of Bono and Bruce Springsteen have. You can really hear the Celtic folk influence in the music too as there’s a very Irish lilt to the melodies on this album and you are lulled by the first few tracks into some comfortable but uneventful listening. However it’s when they let their back line of bass guitar and drums loose with the faster tracks that they really come into their own and pique my attention and the rest of the album really picks things up. My favourite track on the album is, by far, Star Signs, followed by While You Wait and Let it Shine. I’m going to say that they remind me of early 80’s Scottish bands and that, if you know me at all, is by no means a bad thing. Far from it. Think of the likes of Simple Minds and Deacon Blue and you have the idea. The lead guitar on all the tracks is beautifully distinctive and incredibly well played and the back line pick up the rhythms, especially in the faster tracks, and run with them, a strong driving force but never overshadowing the melody and voice.

Just so that I could see how they have been evolving musically over the years I also listened to their first album, Minutes of a Lifetime from 2012, and this is where I came across a bit of a problem. You see, I actually preferred this one to their newer album. There are, of course, a couple of not so brilliant tracks on Minutes of a Lifetime, as there are with every band still experimenting and finding their sound but, in the main, it’s a less polished, much rockier version of the band on Mariette and that’s something they need to guard jealously – this raw edge in their sound, the driving drums, that wonderfully distinctive twangy guitar and the velvet vocals of Errol Sammut on this earlier album are their selling points to my mind and it’s far too easy to lose that with over production and synthetic keyboards, leading to a generic studio sound that loses its soul and maybe becomes too different from their live sound but not different enough from everything else out there.

For now though, they have it pretty much bang on. At their rocking best, Airport Impressions is Celtic rock as it should be. This is early Big Country. This is U2 before they lost their way at the Joshua Tree. This is real music.