Review - A Curious Life: The Story of The Levellers 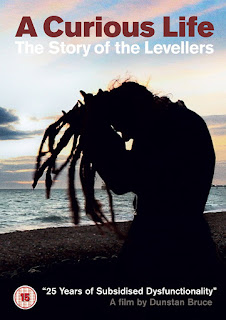 Covering "25 Years of Subsidised Disfunctionality," Steve Taylor-Bryant watches the documentary A Curious Life: The Story of The Levellers ...

There's something I find quite calming about The Levellers. This is quite strange considering the Thatcherite sociopolitical fire they were forged in and the punk level of angst in amongst the folk rhythms but I put it down to memories. I have no bad memories connected to listening to The Levellers. There is no song in their back catalogue that I don't enjoy and some that evoke some blissful thoughts of my life journey in the 1990's. In short? You can't help but love them. Mentioning the memories is important I think as the title of the documentary is rather misleading. I don't consider it The Story of The Levellers at all, rather a film of the band's recollections of things and a video scrapbook showing what it was like being a Leveller during the last couple of decades. Yes, the film has a little of their origins and the rise through into mainstream music but not in the structured way documentaries containing 'The Story of' usually do. This was primarily the bass player, Jeremy, narrating his own search into the band's archive, interspersed with memories and stories from other members of the band and do you know what? It bloody worked! It was something to fascinate at, it was informative and educational, it was tinged with sadness and regret and it was funny. Twenty five years together and this is a band that still love what they do and love each other, something that rarely comes across in films of this type, but this band do love each other and it's almost like they feel being a Leveller is an honour.

Their is plenty outside of the main band to look at. Interviews with Jeremy's parents show a man born into love and encouraged from day one to be himself, a conversation with Derek Green, who signed the band to his then China Records label, gives great insight into the lack of leadership within the band and the high levels of democracy they have in the unit. Excerpts with Michael Evis and managers show the band have an edge not enjoyed by all and I found the fight with the music press particularly fascinating as it's part of the bands history I wasn't familiar with.

The band are just normal guys that make great music with a message they believe in and won't compromise for their art. That's the main point of this film and an important one in a music world now so full of falsity and greed. It's a message set against the background of some of the best music ever played mixing Irish folk with English punk and a digeridoo. It's a film that makes you question your favourite album though. I went into the film comfortable that Zeitgeist was my Levellers record, one that was written for just me, such was the power in the music and lyrics, my friend was convinced Levelling the Land was his, but we left the film convinced that all releases were now as golden as the discs they had won and we haven't had the best yet, that is still to come. That thought excites every part of my being which is what a band should do.

The DVD is a must own for fans and for those who want to know why some of us are fans. For the greedy amongst you that like a bit extra for your buck there are three live gigs on the DVD extras and a beautiful CD with an acoustic performance from St. Patrick's Cathedral in Dublin recorded in 2015. I usually add my favourite YouTube video of a band's single at the end of a review but I don't have a constant favourite for The Levellers. Enjoy the video for "This Garden" but know that tomorrow I would have picked a different one.