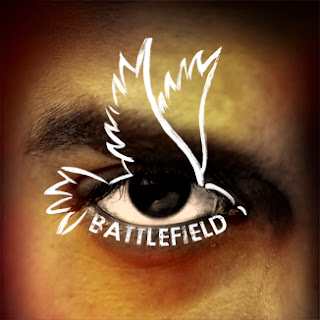 Tony Cross heads bravely to the Battlefield, as he watches the play at the Young Vic theatre...

Peter Brook begins his book, The Empty Space, by saying “I can take any empty space and call it a bare stage. A man walks across this empty space whilst someone else is watching him, and this is all that is needed for act of theatre to be engaged.” He also, as co-director along with Marie-Hélène Estienne, begins Battlefield on an almost bare stage. A man enters. Sitting down to play a drum. To call our attention to what is about to happen.

Battlefield is a short play. Its story is drawn from the Mahabharata. In the aftermath of a great battle, its death toll in millions, our characters roam the stage. Filled with guilt and doubt about their destiny. These characters provide the edge of the story, inside which we are told more stories. Little parables about destiny, about intentions and about life and death.

The stage is – almost – bare. Only a large cloth covers it. Here and there an object represents a throne, a tree or the woods. Smaller pieces of cloth and scarves are called upon to be everything from a baby, to a worm to a scarf. It is, in its way, quite an impressive illustration of the power of actors to conjure up an image and that audiences have an imagination that is capable of seeing a baby being picked up and coddled by its mother when the baby is just a folded scarf, which is what happens at one stage.

What though of the words? Well, there some beauty and depth in here, but some platitudes too. But then one man’s platitude is another man’s revelation. So yes, some if it sounds like dime a dozen self-help guru peddled truisms but some of it reaches deeper than that. And all of it is delivered with real power by the small cast, who are excellent whether called upon to be worms, pigeons, hawks, Kings, Queens or the whole world.

Jared McNeill, as Yudhishthira, is the focus. He’s magnificent as the victorious Prince who cannot enjoy his victory and who is full of doubt and questions. He’s well-supported by Sean O’Callaghan, as the blind old King; Carole Karemera as his mother and Ery Nzaramba as his grandfather Bhishma (although O’Callaghan, Karemera and Nzaramba play other parts too.) It’s a small cast for a small play about big issues.

If you want a visual feast or distractions for the eyes, then this probably isn’t for you. I can see that it might be dull if it doesn’t grab you or if you’re not a fan of the bare stage.

But for me this feels old – not old-fashioned – but it feels like it has its roots in what theatre was to begin with. It is connected to our past. When the single story-teller realised that people would enjoy things more if there was another person to play the parts he couldn’t or when religious ritual crumbled into secular entertainment. Just people on a bare stage telling - or should that be showing – stories.

The question that might be asked is whether this connectedness to the past is wise or whether Brook is in danger of trapping himself in the amber of his style and method. But, as I often say, who knows? Theatre, like all art, is personal. I can try and explain why I like it but ultimately if it works a piece of art, whether it be music or theatre, has an impact beyond the academic. It touches you. That famous quote about all art aspiring to the condition of music is because music, particularly instrumental music can have an emotional impact on you that by-passes the brain and goes straight to the heart. That moves you without needing explanation.

And perhaps that, ultimately, is what Brook is aiming for. But what do I know?

Battlefield is on until 27th February. More information from http://www.youngvic.org/whats-on/battlefield