Opinion - What has the Internet done to Music? 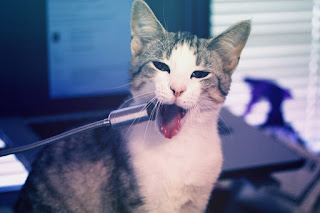 The Defective Inspector sets aside his indie gaming casefiles work for some downtime and a little light internet music ...

When not fiddling around in the digital realms (too easy, move on) I like to sit in a lukewarm bath and ponder on some rather ridiculous nonsense. Do penguins have knees? How many trees are required to sustain a single human? Why was Fury Road so popular? Deep stuff. But recently I thought about how the internet has changed music dramatically over the last 20 years and I wanted to share with you my thoughts without you having to see me naked.

So what started this thought? StarBomb. What is StarBomb? Mainly they are NSFW but fundamentally they are a video game parody band. It’s a pretty small niche market but they entertain my immature side immensely and the only reason I know they exist is because one of the members of the band “EgoRaptor” has a YouTube channel with some rather tasty music videos for their songs. So I wondered… Is this a good thing?

Don’t get me wrong, I love StarBomb, but it’s a new generation of music really and I think it’s fair to say it doesn’t exactly appeal to everyone. Before the days of the internet these guys would have had to SOMEHOW sell their concept in pubs, clubs and bars which seems almost impossible for the target market of… Well people like me, natural born hermits. Less insane concepts have fallen off our PC screens and into concerts. Epic Rap Battles of History did a literal international tour but a few months ago off the back of their internet fame! What about bands which sit in more traditional music? Love him or not Justin Bieber was another YouTube talent trying to share his skill, or perhaps you’re more into Adele? Skrillex? Hell even Tay Zonday can go on my list of people! Point is there is a lot of untapped talent which appears from the strangest corners of the world and would remain unknown without the World Wide Web. If only the door didn’t swing both ways…

The negative side of “anything goes” productions from websites like YouTube is there is a dangerously high can of worms risk to gain ratio. It won’t take you long to find something rather unpleasant, it took me 3 minutes to find works like this; Treasure in you by Lacoy Namata. Never even heard of it before and I wish that was still the case. It’s a downright awful piece of music that I am seriously considering taking to court for the irreparable damage my soul has taken. Waste of time really, I already lost that court case to Rebecca Black. This may seem like me naming and shaming but these people are still willing to keep these videos up LONG past the date other people have going a-ripping into their talent hole and I am not in the nature of blowing smoke. But… has that really changed? Think about it for a second, remember the Cheeky Girls? What about further back in time? Jimmy Cross? I want to add a level of context here… In 1978 Gerry Rafferty released one of the tastiest sax solo’s ever heard embedded into Baker Street while only 2 years before we had to endure the bland and lifeless Afternoon Delight of Starland Vocal Band. The concept of bad talent leaking into the industry and being popular is not new because of the internet it’s just... easier. So we can say there is little change there.

I suppose the biggest pain in the butt for the music industry is the torrent of torrents. Let’s be upfront, we all know at least one person who has sailed the piracy. This phenomena of plainly middle fingering the copyright laws has changed the musical world and not for the better. While I have a variable range of pity, depending on the record labels in question, I can appreciate how it would get someone rather upset rather quickly. But again this is not a new thing, if you’re working class I’ll bet all the money in my bank account that you’ve been down the local market and spotted the local Del Boy flogging hooky copies of everything from ASIA to Zeppelin. These people are NOT new, my first owned cassette was a dodgy version of The Lion King soundtrack and I knew it wasn’t even remotely legit at the tender age of 9. These people did the same thing but with different technology, strangely the methods used today seem less profitable but frankly I’ve never looked deeply into the economic stability of such things. So again, no real change. So what HAS changed?

What it really comes down to, when thinking about the internet as the game changer in music, is thinking about how other technology were accused of the exact same thing. Video killed the radio star, radio killed the live performers. Hell there was probably someone scowling when music could be recorded and played on a gramophone! The point is no matter how much I picked apart the argument splashing around in the water it all came back to the same scapegoating fear. That somehow technology is destined to ruin music when all it really does is open it up even more, for better or for worse. The sweetest thing I always remind myself is that nothing before the internet has truly died. Music videos are still around both on TV and the internet, the radio has evolved with the times and now you can have entire stations dedicated to singular genres, mountains of live concerts and club venues are still being booked and filled! Hell even live classic music is making a comeback by piping the concert through cinemas across the country.

Where does that leave me? Well I wondered that when I put my foot on the bath mat. The internet is a big part of my life, to say it’s not influenced me musically would be inaccurate, but to say its changed music is a greater falsehood. Music is timeless, before our ancestors and before humankind itself, so to say humans can change it fundamentally is arrogant. The people of the world, myself included, are simply opening the doors to room built long before our time and we have only ourselves to blame if we refuse to walk through them.

Images from Facebook of StarBomb, Only Fools and Horses and Epic Rap Battles of History
Email ThisBlogThis!Share to TwitterShare to Facebook