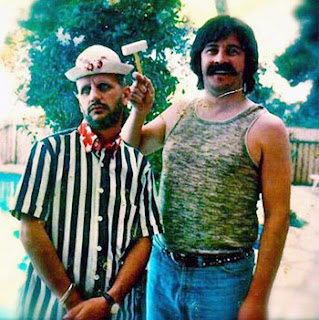 Steve Taylor-Bryant discovers that sometimes the musical apple (crumble or pie) doesn't fall far from the tree as he looks at Sons and Daughters ...


No, wait! Come back! This isn't an article on the 80's Australian soap opera. I'm not quite that desperate for material just yet. No, this is about the offspring of famous musical fathers.

What must it be like to grow up in the vast shadow of a parent? I'm okay with my upbringing, my father whilst very successful wasn't a global megastar, we didn't have teenage girls throwing themselves at our humble abode (if only dreaming made it so) but I often wondered if I would have thrived or crumbled in that scenario. I don't like crumble, I prefer pie, so there will be no more talk of crumble within this article. Instead let's concentrate on those children of famous fathers that did succeed in their own right. Let's look at my list of kids that did well in what could only have been an alien environment to most of us.

Starting with my obvious heroes, John Bonham from Led Zeppelin and The Beatles and Thomas the Tank Engine star Ringo Starr. Jason Bonham had perhaps a different journey to that of Zak Starkey. Bonham senior was a technically gifted drummer in a world famous band but one that didn't perhaps have the fanbase or insanity that followed Ringo et al around the world. Jason I follow on Facebook and love his videos he shares from behind the kit whether it be from a sound check or a gig. The videos however are probably aimed at fans of drumming as you can only hear the kit not the singer or guitarist (bliss in my opinion). Not the same level of fame as his dad but as technically gifted for sure! My own personal favourites of his many projects include his stints on sticks with UFO and Foriegner and pretty much any time he's on stage with the live wire that is Sammy Hagar. Check out jasonbonham.net for more. Zak Starkey however came from living in the shadow of the worlds first proper megastars to succeeding the worlds first megastar drummer. There was no crumbling here, no sir! Zach now sits where once Keith Moon lived and is just as bloody good giving The Who an energy and vibrancy they probably wouldn't have had with just any old session sticksman. Probably my favourite living drummer and in my top 4 behind Buddy Rich and messers Moon and Bonham the senior. Anyone who doubts Ringo's impact on music just look at his legacy. 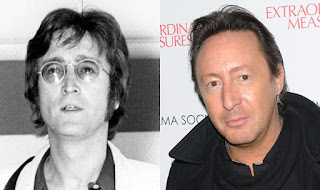 Staying with The Beatles and the icon that is/was John Lennon is unimaginable as a parental figure. However Julian, his eldest son, may not have hit the heights of his father but far from hiding in the shadows he went out there and performed. Given how much he looks and sounds like his dad this could have been a massive risk but the world embraced him in his own right and my highlight has to be Saltwater which is still to this day one of my favourite songs and would be above a John choice in any playlist I compiled. Can't think of a higher honour to bestow on someone to be honest.

Eddie and Wolfgang Van Halen are another parent/child relationship that came with immense fame attached. Eddie wasn't Lennon famous but if you liked rock music in the 1980's then you were a fan of Van Halen - Fact! Don't pretend you weren't, don't pretend you didn't like hairspray music, you liked Van Halen! Wolfgang could have taken an easier route into fame, perhaps acting, but no this child prodigy quite literally followed in his fathers footsteps and joined Van Halen! It might be a case of daddy got him a job you might think, but you'd be wrong! Wolfgang is an accomplished guitarist, a decent drummer like uncle Alex, but he his also a world class bassist, like a proper world class bassist that would fit in ANY band not just his dad's! Pick up any Van Halen album from around 2006 onwards and listen for yourself.

Tim Buckley was a sad story, he was a genius songwriter, brilliant musician, a performer not bound by the constraints of musical genre choosing instead to incorporate most styles in some beautiful and haunting songs before an early death from heroin robbed the world of another talent before he'd even hit his prime. Thankfully he gifted the world his son Jeff who also died far too young in a strange and bizarre swimming accident. He may not have accomplished much in the way of a back catalogue but I dare you to listen to his cover of Leonard Cohen's Hallelujah without tears in your eyes.

Onto a few of the daughters now and you have to start with the offspring of Old Blues Eyes, Frank Sinatra. Frank was everywhere. He was a singer of world renown, he was a star of musicals, and he was a rarity in that he went from a successful singing career to become an Oscar winning actor. How do you follow that legacy as a child? Well, you be Nancy Sinatra is how. There is a huge gap in my listening that I've never quite filled and that is classic female singers. I don't know why, it's not some insane anti-female agenda, I love modern day singers like Adele, and from the era when Nancy was in her musical prime I adore bands that had female vocalists. I just seem to not 'get' solo singers of that time (feel free to suggest some for my education and personal betterment in the comments below) but Nancy Sinatra did seep through. These Boots Were Made For Walking is rightly still played on radios around the world today but it's Bang Bang that grips me every time I hear it.

Kim and Marty Wilde are no strangers to my ears. Marty Wilde was essential listening in my childhood home and it was in the same period that my lifelong obsession with his daughter Kim began. I don't know if it was her looks (am I really that shallow?) or her loveable personality on television but I had to be part of the Kim Wilde fandom. Notable loves still to this day are the duet with Nena (growing up in Germany you had to love Nena) Anyplace, Anywhere, Anytime and of course, where it all began for me, Kids in America.

I shouldn't like Wilson Phillips. It's bubblegum pop, and I'm one of 'those' people that cannot stand The Beach Boys. However even as I'm writing this sentence I cannot get Hold On out of my head! I'm going to pretend I only listen to them as the Phillips from the bands name is Chynna Phillips, daughter of The Mamas & The Papas duo Michelle and John.

It's still to be determined whether the daughter of my all time favourite singer Billy Joel, Alexa Ray Joel, is going to have as big an impact as her father has or whether Frances Bean Cobain still has it in her to step out of the vast shadow that is father Kurt, but I'll keep interested and cross my fingers.

Now to research the Sons and Daughters of famous mothers. Feel free to suggest some. In the meantime though...