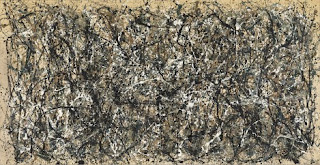 You know how it is, you park your car erroneously under to only tree in the carpark only to come back a few hours later to find the car roof liberally covered in bird droppings of various sizes and colours and are left wondering what the hell the poor pigeons ate to produce the yellow and purple bits. It’s much the same when you look at the later work of Jackson Pollock. How the hell can these random drips and splashes of paint on a canvas be considered some of the most expensive and sought after artwork in the world?

OK, before we get into the artistry, a bit about the artist. Paul Jackson Pollock was born in Cody Wyoming in 1912, the youngest of 5, although the family moved to San Diego when he was still very young and they moved around a lot of the south west as he grew up, where Pollock spent a lot of time out in the open, learned to love nature, its colours and textures, and became interested in the artwork of Native Americans. At 18, Pollock moved to New York to study art with Thomas Hart Benton at the Art Students League. It was at this time that Pollock’s interest in murals and wall paintings grew, especially the work of Mexican muralists.

He was also taken by the surrealist movement and European Modernism, being especially attracted to the work of Picasso and began experimenting with Abstraction and creating semi-abstract murals on large wall canvases using liquid paint. In the early 40’s the huge canvases moved from wall to floor and by 1947 the paint started to be put on with sticks and syringes rather than brushes, with mark making and depth being added using knives and trowels scratching through the wet paint, as Pollock moved into the dynamism of gestural painting, where the act of creating the painting was just as important as the end result. It is these “drip” paintings for which he is most famous but it is also a technique that only lasted for a few years, as he abandoned it abruptly in 1951, at the height of its commercial success, moving instead to dark, semi abstract paintings, the most famous of which, the Black Pourings, never sold when they were first exhibited, although he gained a little commercial success once again once the colour returned to his work. Pollock struggled throughout his life with alcoholism and, it has been suggested, bipolarism and he died in an alcohol induced car accident in 1956, aged just 44 and this, along with his completely innovative and shocking painting style, has led to his legendary status. 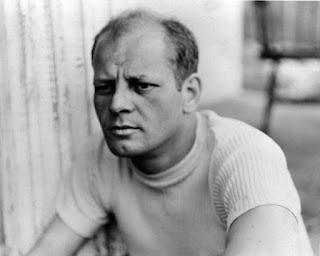 So why is it art? A lot of the artistry in Pollock’s work, to me, is about process and timing rather than the end product. Yes I do really like the drip paintings themselves, can see how they have evolved from his previous Mexican inspired mural work and, indeed, there have been several scientific studies looking at the fractal “Chaos Theory” nature of the lines and splashes in the likes of Lavender Mist. But look at the other famous works in America at the same time as Pollock was dancing around his studio splashing and scratching paint with perceived abandon in as he let the paint fall in a stream of consciousness from his inner self. In contrast to this utter abstraction, you have the figurative work of Edward Hopper and Norman Rockwell and the rest of the Regionalist painters, intent on capturing the social history of the time on canvas. Even in more abstract terms you have the colour fields of Mark Rothko and the strict geometric shapes of Jimmy Ernst, putting colour on canvas in shapes that are not representative of anything "real" but are still geometric. Nothing prepared the artworld for the literally whirling dervish of Jackson Pollock. He created the art that he wanted to create, with no discernible subject, at a time when commercial viability was still guiding the artist’s hand in America. He made it acceptable to work outwith “normal” artistic practises and to be more experimental with mark making. But mostly he did something different. Something brave, new and innovative. Something that shocked the art world to its foundations and then rebuilt modern art from the bottom up. THAT is art.