Opinion - The Concept of Coheed and Cambria 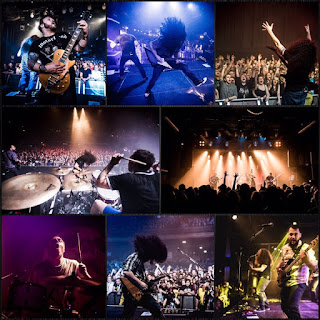 David Ames has a favourite band that you may not have heard of yet, even though they've recently been touring in the UK. In the first of a series of articles, here's what's so good about Coheed and Cambria...

In the history of the music world, many musicians have attempted to craft a story through their music. These stories are known as Concept Albums and usually follow either a narrative structure or a collection of themes. Throughout the annals of music history, such artists as Iron Maiden, R. Kelly, Pink Floyd, The Beatles (kind of), The Who, Adele, The Beach Boys and many more have attempted to craft concepts which would live on through their music, all with varying degrees of success. You may notice that I left out Rush because they deserve their very own sentence in this article but there is a new champion of the concept album; one who not only wrote a single album as a story…they wrote seven, all focusing on the same story. That’s right...a seven album, connected narrative.

You may notice that I write with a certain flame for Coheed. It is true that they are my favourite band. In fact, I have an entire sleeve of tattoos dedicated to the group so this series of articles will probably fall somewhere between honest journalism and gratuitous fanfare that would make an anime created blush. Either way, over the course of the next few months, I will be reviewing all of the albums, talking both about the music and the story interlaced therein. At the end of this run, I will then review their latest offering, the first of what may be many not involving the story.

I want to begin by stating that this band is definitively NOT a novelty. Claudio Sanchez (the frontman and hair extraordinaire) has said countless times that usually the music and lyrics come first and then he adapts them to the story. They may use a sci-fi epic story (think Star Wars but much, MUCH darker), graphic novels, and a full-fledged narrative novel to weave their art but there is so much genuine emotion and talent in the music and vocals that they should be recognized as, first and foremost, an amazing band. Claudio Sanchez (Vocals, Guitar), Travis Stever (Guitar, Vocals), Josh Eppard (Drums, Vocals), and Zach Cooper (Bass, Vocals) make up Coheed and Cambria and their art is basically the reason that I have survived this long in the world.

I will start this off by saying that there is something about Claudio’s voice. Many people hear him and first think, “There is no way I can get into this. His voice is too high.” This will not last long. After more than one or two listens, his voice becomes something that inspires adoration, not assault. The only way I can sum it up is to say that when he sings, you feel it in your soul and you KNOW that he feels it too.

This band is, at its heart, a fan’s band. Everything that they do is marketed toward their fans and their releases, usually with limited edition Box Set editions and Vinyl Issues, are a testament to their fan base. They are also easily the best live band that I have ever had the pleasure of watching…15 times (soon to be 16 on February 29th in Columbus, OH…buy tickets and come too!). Their songs are filled with ample opportunities to sing along, creating a back and forth with the band that is rarely seen. I have never been to a Coheed show where the crowd wasn’t all in at all times (except for a festival show in Milwaukee this past summer, but there were seats everywhere so the chance to go crazy wasn’t afforded). They play for their fans and we, in return, live for the band.

We will begin in the order in which the eight albums were released and make our way through the story and the music in this fashion. Be prepared for fawning, ubiquitious lyrical usage, and far-too-in depth explanation of the story.

Come along with me as we trace the amazing musical careers of Coheed and Cambria and follow The Amory Wars storyline as well. We will laugh, we will cry, I might need to find a private place for a few moments…*ahem*…

It will be as epic as the battle with Wilhelm Ryan and the Fall of House Atlantic (this will all make a lot more sense in a few articles).

Meanwhile, from the newest album...