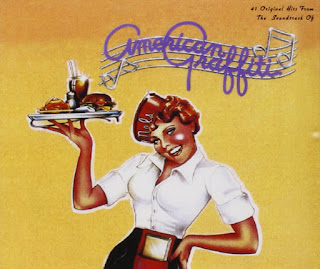 So... Grease is the word? Err... no. Not according to Nate McKenzie. For him, American Graffiti is the definitive film and soundtrack of Rock n Roll America...

Let's get one thing straight right off the line:

American Graffiti is superior in every way to Grease.

American Graffiti is a better story, it's more believable, the actors are better, it has a better director, better cars, it's funnier... Shall I keep going?

The female characters are stronger and far more badass than the "beauty school dropout"s of Grease. Carol, a young Mackenzie Phillips, had more backbone than any of the Pink Ladies. (Yes, that includes Rizzo) And don't get me started on prettyboy Travolta. John Milner single handedly beat up two thugs who had stolen Steve's car in a dark parking lot. He also took down Bob Falfa and his wicked '55 Chevy in a drag race. Since Harrison Ford is infinitely superior to John Travolta there's no reason to think that Paul Le Mat wouldn't own Travolta, too. (In fact, a case could be made that John Milner is more badass than Jim Stark but that's an entirely different article)

Also, what the hell is with the flying car at the end of Grease? You want to see a car really fly? Check out John Milner's '32 Deuce Coupe tear up Paradise Road.

Grease is just that - an oily stain on the shop floor where the smooth running, muscle-bound machine that is American Graffiti gets its tune-ups in between sweeping circuits through the Valley and stealing your best girl.

But this article (or rant if I'm being honest) is not about 'film' it's about music. 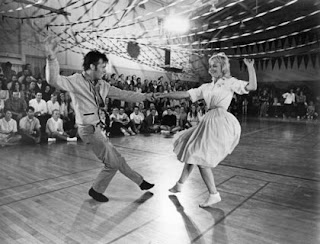 Graffiti was one of the first films to eschew a traditional musical score for using a soundtrack of popular hit songs and from the opening title screen, American Graffiti sets the bar high with Bill Haley's Rock Around The Clock. If you don't at least tap your toes when you hear that song take your 'glad rags' off because you've officially succumbed to whatever happened to you as a child that slowly strangled your sense of joy and fun. The lyrics are simple but the tune bounces with that infectious twitching and clipped deep bass rhythm.

The hits don't stop there either: "At The Hop", "Since I Don't Have You", "Johnny B. Goode", "Sixteen Candles"; Buddy Holly, The Beach Boys, The Platters, Flash Cadillac and the Continental Kids. The track list is ripe with Oldies staples. "Where Were You In '62" was the tagline for American Graffiti, and the soundtrack is a Who's Who that encompasses the youth and mindset of a generation of Smalltown, USA kids and transports them right back to those days.

Some of the music in Grease may be original but it is terrible. It is literally dive-bar quality karaoke as indicated by people who sadistically choose to assault the hearing of friends and strangers with public screeching renditions of Summer Nights. Summer Nights: a song in which the girls are obsessed with money and the guys are obsessed with getting laid. (Not that the latter part is inaccurate...)

But compare that to the timeless innocence, yet remarkably wise-beyond-their-years crooning of Frankie Lymon and the Teenagers, begging the question, "Why Do Fools Fall In Love?"

Love is a losing game,
Love can be a shame
I know of a fool, you see,
For that fool is me!

Frankie's voice blares from the radio waves when the stunning, ethereal, (perhaps imaginary) Suzanne Somers first permeates Curt's existence as The Blonde in the White T-Bird leading to his tragic, unrequited infatuation.

Good luck getting that sort of existential commentary from "We go together like rama lama lama ka dinga da dinga dong". 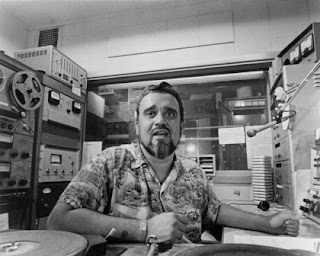 THE HOWL OF THE WOLF

Even if you can somehow look passed all of that, thinking to yourself, "I don't like myself enough to admit that American Graffiti is superior to Grease; leave me to my rubian, lemming ways!" there is still one trump card you can not ignore: The Jack. Robert Weston Smith.

John Travolta might have been become an icon in the 1970s but Wolfman Jack was the voice that an entire generation knew and adored. His gravelly intonations introducing the golden hits of R&B, soul, blues, and Rock & Roll, along with recordings of musings and prank phone calls overlayed on the American Graffiti soundtrack gave the movie an authenticity that few movies have ever achieved.

When you watch American Graffiti and hear the Wolfman, his words filtering through whisky-dipped vocal chords, you are on that late night joyride with Steve and Laurie; you are Terry the Toad, nay, Tiger wooing Debbie on your tuck-and-roll upholstery.

The use of his recordings was a brilliant form of ambiguous narration, which at times was a direct commentary on the action.

To wit, at one point after Curt gets "kidnapped" by the Pharaohs he sees the fabled blonde in the white T-Bird that he has been chasing all night but looks on helplessly as the Pharaohs have him at their mercy. The song playing as Curt concedes the loss of the moment? "Ain't That A Shame" by Fats Domino.

Later, when Curt and the Pharaohs tear off the back axle of the cop car you hear a high-pitched cackle followed by a joyous Wolfman declaring, "Aw I can't believe it! Feels so good...cuz you're 16." as the scene transitions to Milner's Coupe driving down a dark road. "You're sixteen (You're Beautiful and You're Mine) begins flowing from the radio as John Milner pretends to seduce Carol in hopes of tricking her into telling him where she lives so he can take her home. It is a fluid transition; the likes of which director George Lucas puts on display years later in his Star Wars films.

The best example of the soundtrack's perfection, and more pertinently Wolfman Jack's genius in both American Graffiti and American radio, is on full display when the scenes are meandering on screen.

Specifically, halfway through the movie, as multiple successive shots reintroduce us to the cast while they cruise around town, Wolfman is having a go with a phone operator, teasing her about her name being "Collect Call". "I love you operator" he tells her.

After asking, "Is Floyd there?" his scratchy alto drops to a coaxing grit. "I love you Floyd. Floyd, I cannot look on thee. Love took my hand, and smiling did reply: 'Who made the eyes but I?' " This is a paraphrasing of the poem 'Love Bade Me Welcome' by George Herbert.

In a single interaction, Wolfman Jack displays his wit and humor alongside his brilliance sub rosa.

The film flows with the hand-picked songs and is further bolstered by Wolfman Jack's omnipresence and ubiquitous sound. American Graffiti would be a great film with even a standard soundtrack, but all these pieces combine to create a machine that purrs like an idling Chevy 327.

Grease may be the word but talk is cheap. American Graffiti is etched into the legacy of classic Americana.