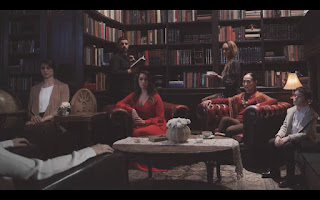 A fully authorised interpretation of David Bowie's most recent album is coming to Instagram. Find out more about UNBOUND: A ★ InstaMiniSeries...

InstaMiniSeries, the innovative channel that creates episodic programming exclusively for the Instagram platform, was given unique pre-release access to the music from ★ (pronounced 'Blackstar'), the 28th studio album by cultural legend and icon David Bowie. The result of their work with Bowie's material is UNBOUND: A ★ InstaMiniSeries. The first of 16 episodes premières early on Friday morning on instagram.com/instaminiseries. New episodes will début at the same time (1 AM GMT) each subsequent Monday, Tuesday, Thursday and Friday.

Nikki Borges, InstaMiniSeries Founder and Executive Producer said: "David Bowie has always been about reinvention over repetition. Remarkably honest and passionate in his work, his innovations have influenced our own work as we transform a social media platform into a creative outlet. We are grateful to have the opportunity to participate with the chameleonic rock icon and honoured to be entrusted with interpreting his art."

The release of David Bowie's ★ on January 8, via ISO/Columbia Records wrapped up months of feverish anticipation punctuated by some of the best reviews of Bowie's storied career and a #1 debut in more than 20 countries—including a first ever #1 in the U.S. In the weeks since, the unprecedented outpouring of love and appreciation for ★ and the entire Bowie catalogue has continued to build exponentially: In addition to ★ topping charts worldwide, 12 Bowie albums filled out the upper reaches of the UK charts, tying Elvis Presley's record for most simultaneous entries in the UK Top 40. Bowie's visual body of work has fared similarly, smashing the Vevo record for most video views in one day with an astounding 51 million on January 11 alone—the most-watched of these being the just-released "Lazarus," which has since surpassed 31 million views while the clip for the ★ title track is approaching 25 million. At radio, "Lazarus" scored Bowie his first Top 40 single since 1987 and remains in the Top 25 at Triple AAA, while tracks spanning his entire career from "Space Oddity" to ★ commandeered a record 21 of the total 50 positions on Billboard's Hot Rock songs chart.

With his enduring legacy as a savvy observer and pioneering user of emerging technology and media, Bowie saw in InstaMiniSeries an exciting new platform to explore interpretation of and storytelling within his music. Stopping short of an artistic collaboration, Bowie instead opened the doors last fall to the InstaMiniSeries creative team, Carolynn Cecilia and Nikki Borges, and provided them advance, unmediated access to the music and images from ★ thus allowing them to create their own visual interpretations of the songs, with no limits or preconditions on his part.

Completed in December 2015 and spanning 16 episodes, UNBOUND: A ★ InstaMiniSeries takes its audience on a journey of evocative images inspired by the moods suggested in the album's music, lyrics and artwork. The series is propelled by a focus on this visual interpretation of the ★ album as opposed to a literal, linear narrative. Each episode of the series, designed with a global audience in mind, is sure to capture the imaginations of all who experience it and will undoubtedly lead to endless speculation and discussion of meaning, metaphor and intention.

Carolynn Cecilia, UNBOUND Writer and Producer, said "David Bowie was a trailblazer, not just in the world of music, but in the art of storytelling. Whether through lyrics, melodies, film, theater or mythical persona he never fails to transcend WHAT WAS and set the tone -and the bar- for what CAN BE. As story-tellers and music lovers, who better for us to be inspired by than David Bowie?"

Lawrence Peryer, Producer of UNBOUND, added "In light of recent events, this project has taken on new significance for all of us – cast and crew. We are very happy to be bringing a new creative work to David's fansworldwide at a time when a focus on his music and art is much-needed."