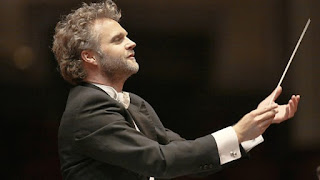 Søndergård was appointed Principal Conductor in 2011 and took up his position in September 2012. His contract extension will see him continue as Principal Conductor until at least 2018. Highlights with the orchestra to date have included his exploration of Mahler’s symphonies. BBC NOW has performed Nos 2, 4, 5 and 9 with Søndergård and will close the 2015-16 season with a performance of Symphony No. 1 on 16 June 2016 at Brangwyn Hall and 17 June 2016 at St David’s Hall. Søndergård’s Mahler cycle with BBC NOW will be completed over this next period of his contract.

Thomas Søndergård said “I’m so pleased to be extending my contract with this wonderful and passionate orchestra. We’re on an exciting musical journey together, with some amazing performances so far. To complete a Mahler symphony cycle with my orchestra is such a special and important project for me, the warm response from audiences has been fantastic, testament to our fine musicians. I really feel that I know this orchestra well. There are so many possibilities for the future, and I hope we keep surprising each other too!”

Michael Garvey, Director of BBC NOW, added “As Wales’ national orchestra, we are proud to have an artist of Thomas’s calibre and musicality as our Principal Conductor and I’m delighted we are today announcing that relationship will continue for at least two more years. We’ve achieved much in Thomas’s first period with us and there is even more to look forward to in the next few years: continuing our adventures with Mahler; rich and inspiring live performances for our audiences here in Wales and the UK; and aspirations to travel further afield with Thomas on tour. We've an exciting few years ahead!"

Søndergård’s repertoire is broad, ranging from large symphonic works to refined classical pieces as well as new music. Other recent highlights have included a performance of Rachmaninov’s choral symphony The Bells, the UK premiere of Debussy’s Nocturne for Violin and Orchestra, completed and orchestrated by Robert Orledge, a performance marking the Dutilleux centenary live on BBC Radio 3, and four performances during the BBC Proms 2015 season including the world premiere of B Tommy Andersson’s Pan.

Søndergård has also been involved in the BBC initiative Ten Pieces, which aims to open up classical music to primary school children across the UK. His involvement, alongside the BBC NOW, culminated in two performances at the BBC Proms 2015. This season, he made his Mahler Chamber Orchestra debut at 2015 Musikfest Berlin and following its great success has been invited back. Other engagements this season include a return to DSO Berlin, Houston, Atlanta and Danish National Symphony Orchestras.

Søndergård is also an experienced opera conductor, and last season conducted Les dialogues des Carmelites at Royal Stockholm Opera. In the 2012/13 season he appeared at both the Royal Danish Opera (The Cunning Little Vixen) and also Royal Swedish Opera (Turandot with Nina Stemme), following his success there with Tosca in 2011. In 2008, he made his Stuttgart Staatsoper debut (Tosca), returning in 2010 for their new production of Luisa Miller. Next season, he makes his debut for Deutsche Oper Berlin with a new production. In Spring 2015 Søndergård and BBC NOW released their first commercial recording of Sibelius Symphonies 2 and 7 (LINN records). Other noteworthy recordings include Vilde Frang's celebrated first recording for EMI, and Ruder’s Second Piano Concerto on Bridge Records which was nominated for a Gramophone Award in 2011.