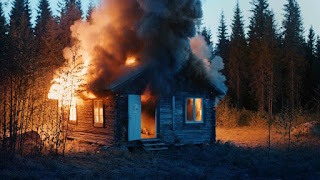 Icelandic artist Ragnar Kjartansson is to exhibit at the Barbican Centre Gallery this summer...

Opening in July, this is the first ever UK survey of the work of the internationally acclaimed Icelandic artist Ragnar Kjartansson, charting his wide-ranging practice across film and performance, and his less well known work as a painter and draughtsman. Born into a family active in Iceland’s theatre scene, Kjartansson draws from a varied history of stage traditions, film, music and literature from traditional Icelandic stories to opera music to contemporary pop culture. His performances, video installations, drawings and paintings explore the boundary between fact and fiction, as well as constructs of myth and identity. Donning various guises from a knight, to a Hollywood crooner, to the incarnation of death, Kjartansson both celebrates and derides the romanticised figure of the artist as cultural hero.

Ragnar Kjartansson said: “I am extremely pleased to have my works in the legendary Barbican. The interdisciplinary buffet that the Barbican is fits my unfocused practice. Seriously I love the building the utopian feel and the programme that has kept me coming and coming as a tourist since my parents took me there in the 80´s.” 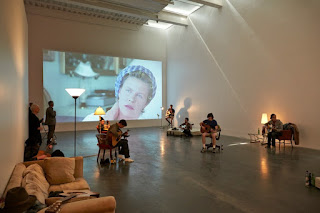 Music, repetition and endurance are key ingredients in Kjartansson’s video and performance works First shown to much acclaim at the New Museum in New York, Kjartansson’s autobiographical performance, Take me here by the Dishwasher: Memorial for a Marriage (2014, above) will be presented. Full of romance and humour, 10 troubadours spread throughout the lower gallery, sing and strum their guitars against the projected soft focus love scene, acted by Kjartansson’s parents. One of the earliest works on show, Me and My Mother , is an on-going video collaboration with his mother dating from 2000, which features four video screens, filmed over five years apart where she repeatedly spits in his face over several minutes with intensity and vigour. Other highlights of this survey is Kjartansson’s celebrated video installation, The Visitors (2012), which comprises of a series of nine life-size video tableaux of a musical performance staged at historic Rokeby Farm in Upstate New York where Kjartansson has been a frequent visitor since 2007.

Ragnar Kjartansson was born in Reykjavík, Iceland in 1976, where he lives and works. Kjartansson was the recipient of Performa’s 2011 Malcolm McLaren Award for his performance of Bliss, a twelve-hour live loop of the final aria of Mozart’s The Marriage of Figaro and in 2009 he was the youngest artist to represent Iceland at the Venice Biennale.

Images - top: From the series Scenes From Western Culture, 2015. Eight-channel video, colour, sound. Courtesy of the artist, Luhring Augustine, New York and i8 Gallery, Reykjavík.
above: Take me here by the Dishwasher: Memorial for a Marriage, 2011, 2014.